By Newsroom on April 13, 2016Comments Off on Google’s new Voice Access app lets you control your phone with your voice

The company is beta-testing an app called Voice Access that enables Android users to navigate their smartphones using only their voice.

Voice Access helps people with motor impairments navigate their touch screens. The app allows you to navigate between your home screen and other screens as well and interact with the content you’re seeing by using voice commands. You can also use the app for text editing and dictation.

It relies on the same tech behind the “Okay, Google,” hands-free commands so you’ll need to have “Okay Google,” detection enabled in your settings (there’s also a workaround if you don’t have a device that supports the feature.)

Voice Access isn’t the only new feature Google is developing with accessibility in mind. The company is also plans to add new features for visually impaired users with the upcoming Android N release. 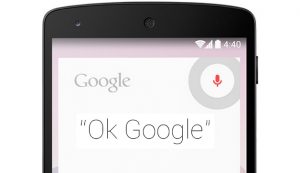 Android N, which is currently in early preview stage, adds a new Vision Settings menu to the initial setup page to make those options “front and centre” so that people with visual impairments can “independently set up their own device and activate the features they need, right from the start,” Google says. Vision Settings includes options to control font size, display size, magnification and TalkBack, which provides audio cues to help people navigate what’s on their screens.

Google’s new Voice Access app lets you control your phone with your voice added by Newsroom on April 13, 2016
View all posts by Newsroom →