By Newsroom on March 29, 2018Comments Off on Game of Whales helps mobile game developers make money in their sleep, without using advertising 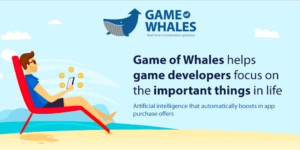 200 million downloads (and counting), mobile games publisher Deemedya had a problem; existing platforms that promised to increase app monetization simply weren’t delivering. So the team decided to go away and build their perfect platform. After 18 months in stealth mode, Game of Whales is the result.

Game of Whales is a new kind of app monetization tool. Built around advanced AI and machine learning algorithms, it ‘learns’ from player behaviours and is able to predict in real-time what kinds of offers at what time are most likely to work. Based on trial campaigns with 18 million gamers, Game of Whales had a significant effect, boosting revenues in some cases by more than 25%. Best of all, the platform is totally automated. Once the SDK is integrated into a game, there is a learning phase, and then the AI kicks in. After that, you simply log-in to see how your game is making more money than before.

The name comes from the nickname for high-spending players, which are called Whales. Every game company tries to attract and retain these players as they are responsible for a disproportionately large percentage of game revenues.

“As a game publisher ourselves, we are only too familiar with the ongoing stress and complexity of keeping people playing, and getting those players to spend something – anything! – in our game. Game of Whales happened because, frankly, there was nothing out there that did the things we wanted,” said Doron Kagan CEO of Game of Whales. “Making successful games should be about fun and creativity, not spreadsheets and data analytics. So we thought, why not build something that takes care of all that? That’s where the AI approach came from. The algorithms can analyse and make decisions faster and better than we ever could, and the proof is in the results it’s generated. You literally plug it in to your game, and leave it alone.”

The platform works by micro-segmenting users into small groups based on very granular usage and play behavior. The AI automation then calculates when and how to offer specific incentives to drive purchases. What’s more, thanks to the platform’s real-time predictive capabilities, Game of Whales can identify players that likely to churn, and automatically shift focus onto retention.

The results from the 18 million players that have formed the initial trials have been impressive:

● Overall daily revenues generated from F2P games have increased by 25%, with some games showing even greater improvement
● The number of players churning decreased by 10%
● Player engagement increased by up to 9%
● The conversion of non-paying to paying players increased by over 15%
● ARPDAU grew by an average of 20%, up to 30% in some countries
● ARPPU increase by more than 10%

(Note: these figures are based on a comparison of game data and revenues between a control group of apps not using the platform and campaign group which was integrated with Game of Whales.)

The platform also discovered some interesting behaviours when it came to players spending money on in-app purchases. For example, ‘whales’ who had already spent more than $300 playing particular game were keen to spend more, not less, on additional items. This specific group of whales sweet spot for successful offers was more than $50 – with any offers under $20 completely ignored.

Game of Whales helps mobile game developers make money in their sleep, without using advertising added by Newsroom on March 29, 2018
View all posts by Newsroom →