By Newsroom on October 18, 2016Comments Off on Ford and Xaxis score in Vietnam using emotional triggers around the UEFA Champions League 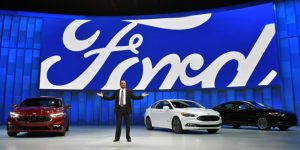 With most UEFA Champions League games playing live after midnight in Vietnam, those who stay up for the action are likely dedicated and passionate fans. It makes sense then that Ford and Xaxis Sports used data to trigger ads around emotional moments last season, helping sales objectives for the campaign to come in over target.

The campaign used data to time ads to show on people’s mobile phones at emotional points of games, for example when a team scored. It also used typical moments of second screening, such as half time, to also serve ads to people watching.

According to Ford, the ads over achieved for its sales objectives. Tuan Anh Nguyen, Ford Vietnam’s marketing manager, told The Drum: “What we hoped to achieve from this campaign was to connect Ford to its targeted customers through a big sporting event. This served as a huge opportunity to trigger Ford customers through advertising messages and engage them to visit Ford’s website. The results were over-achieved retail sales objectives of 117 per cent and 122 per cent in June and July respectively.”

Using emotional triggers in data can be sensitive, according to Arshan Saha, VP South and South-East Asia at Xaxis, as he says getting it wrong can lead to a negative reaction from the person viewing the ad.

“You want to align the emotion of the moment with the tenor of the ad to create a natural connection. You also need to take into account that emotion can go both ways. So for example, if you have Country A playing Country B and Country A scores a goal, it’s only going to make sense to show a celebratory “goal” ad to Country A supporters. Using audience and location data we are able to identify and reach those audiences who are likely to be Country A supporters,” he explained.

The way this worked was to have a selection of different creative ready to add into the placement, based on the data triggers. According to Xaxis, Ford customized its creatives to suit the different sport triggers; for example, when a goal was scored, they would run a creative with the text reading “GOAL!”

For Ford, the success seen in its experiments with dynamic creative and emotional data will see it use the same tactic for next year too.

“In 2017, we look forward to continuing to book Xaxis Ad Network and we consider it a key channel in the marketing activities for Ford Vietnam”, said Nguyen.

Ford and Xaxis score in Vietnam using emotional triggers around the UEFA Champions League added by Newsroom on October 18, 2016
View all posts by Newsroom →