By Newsroom on April 18, 2017Comments Off on eMarketer Releases New Programmatic Advertising Estimates 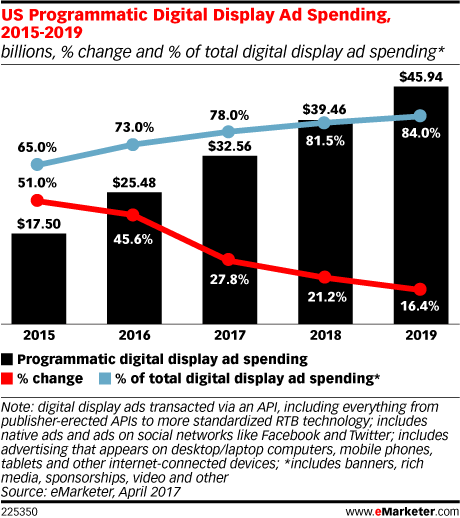 In its latest forecast, eMarketer estimates nearly four of every five US digital display dollars will transact programmatically in 2017, totaling $32.56 billion. By the end of the forecast period, that share will rise to 84.0%, leaving little doubt that buyers and sellers are continuing to invest in automated ad buying.

For ad buyers and sellers, the desire and need for greater control are moving them toward more private setups.

Already, 74.5%, or $24.25 billion, of US digital display ad dollars transacted programmatically will go to private marketplaces and programmatic direct setups. 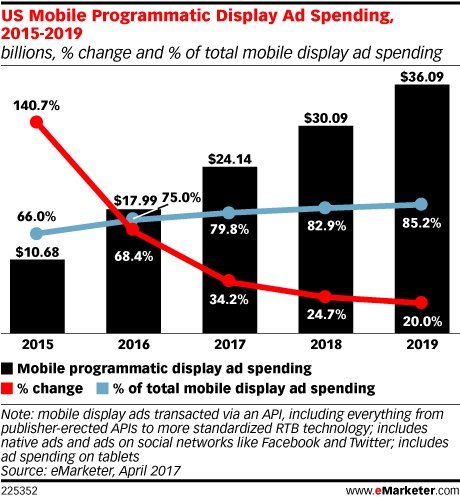 Video is one area that has benefited from such advancements and controls. 2016 marked the first time in which more than half of all US digital video ad dollars traded via automation; that portion will grow another 42.3% this year to $9.13 billion. By 2018, nearly three-quarters of all video ad dollars will transact programmatically.

The growth in one-to-one deals has been especially swift on mobile. Almost eight in 10 US mobile digital display ads are purchased programmatically—a portion that will rise to 85.2% by 2019.

Direct deals are also on the rise for native advertising, a category that’s newer to programmatic.

Not counting native ads placed on social networks, less than half of all US native digital display ads are anticipated to transact programmatically this year—a portion that is well under the broader digital display average of 78.0%.

But with publishers now transitioning to more programmatically-driven native ad formats, such as in-feed ads and in-stream or in-article video, advertisers are eager to access them privately.