By Newsroom on June 11, 2018Comments Off on Disney and OmniVirt launch 360° video ad campaign for Aladdin on Broadway 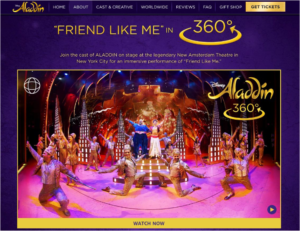 As part of the campaign, viewers can watch the show’s premiere musical number ‘a friend like me’ in a 360 degree format. Digital overlays of text are placed around the video sphere which share interesting facts behind the show.

For example, as Genie sings to the audience, golden indicators appear on screen directs the user to click/drag or move their phone and a fact like “During the course of ‘Friend like Me’, Genie travels the equivalent of 24 basketball courts in eight minutes” appears.

Brad Phaisan, CEO of OmniVirt said: “Disney’s 360° experience is among the most smartly produced 360 degree content we’ve seen in the market–it takes full advantage of the content format and adds in digital flourishes that render for a magical experience.”

Disney and OmniVirt launch 360° video ad campaign for Aladdin on Broadway added by Newsroom on June 11, 2018
View all posts by Newsroom →