By Newsroom on April 3, 2017Comments Off on Coca-Cola Germany Launch ‘SnapSkate’ The First Ever Native Snapchat Game

Coca-Cola takes everybody by surprise with an innovative twist on social media platform Snapchat. In the course of the launch campaign for the new Coca-Cola Zero Sugar, Ogilvy & Mather Berlin developed a game utilising the Snapchat Stories feature. “SnapSkate”, a classic Jump’n’Run game, lets teens control pro skater Denny Pham through several levels – on the Snapchat channel of renowned social media influencer izzi. Coca-Cola is the first brand to prove how advertisers can use Snapchat apart from the usual ads for a highly creative product launch. 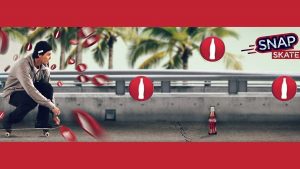 For the last couple of years, Coca-Cola has been very successful with Coke TV and its Always-On strategy and, in collaboration with Ogilvy & Mather Berlin as well, has been highly present throughout all relevant social media channels. To spark awareness for the new Coca-Cola Zero Sugar, especially among teenagers,”SnapSkate” is a smart move onto Snapchat, a platform highly attractive for the desired target audience.

Michael Willeke, Director of Integrated Marketing Communications for Western Europe, states: “With ‘SnapSkate’ we found an innovative approach to use Snapchat in an entirely different way. It was our primary ambition to create involvement with the brand among teens and tweens.” The game “SnapSkate” will be live on Snapchat on three consecutive days starting March 31st. 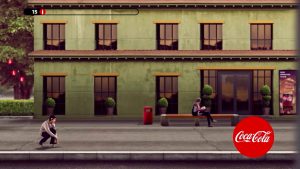 For its execution, Ogilvy & Mather did not rely on the usual media placement for games offered by Snapchat, but for the first time managed to create real native gaming content directly in a Snapchat story. For this, SnapSkate“ was embedded into a narrative that transitions into the game seamlessly. Felix Fenz, Executive Creative Director Ogilvy & Mather Berlin: “With ‘SnapSkate’ native advertising becomes native entertainment. The brand is an essential part of the story, and therefore an authentic part of the game.”

The mechanics of “SnapSkate” solely rely on the original navigation controls of Snapchat and creatively utilise them for their purpose. The only thing left for the player to do is to tap the screen at the right moment. The game consists of several dozens of Snaps, short video clips with a length of up to 10 seconds. 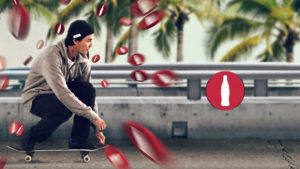 The player has to skip to the next Snap at the right moment by tapping the screen, letting Denny skate through different worlds, while doing astonishing tricks and collecting Coke Coins, Power-ups and eventually, a bonus level. If the player skips the Snap too late, Denny fails to land his tricks. Among all contestants who make it to the finish line, Coca-Cola raffles prizes.

The Snapchat game is accompanied by vlogs and shoutouts on several social media channels of influencer Izzi, as well as on the Coke owned teen engagement platform Coke TV. For the first time the favourable concept of utilising influencers as content producers and audience multipliers was enhanced to a social media based game developed exclusively for Coca-Cola.

Coca-Cola Germany Launch ‘SnapSkate’ The First Ever Native Snapchat Game added by Newsroom on April 3, 2017
View all posts by Newsroom →