By Newsroom on February 14, 2018Comments Off on BBC and Google Daydream take you under the sea in VR

BBC Worldwide has teamed up with Google and BAFTA-winning game studio Preloaded to create a virtual reality experience for the audiences of the BBC’s hugely successful national history programmes like Blue Planet II and Planet Earth II.

BBC Earth: Life in VR has been created by Preloaded in collaboration with BBC Earth Productions and BBC Studio’s VR team for use on Google’s Daydream headset. It enables users to enter a ‘real-time world’ and view the behaviours and relationships that animals have within the ocean, providing the user with passive moments and active ‘VR-only’ moments.

“We are really excited to be working with Google to bring BBC nature content to Daydream,” said Bradley Crooks, head of digital entertainment & games at BBC Worldwide. “VR allows us to provide our audiences a new level of immersion unparalleled by other mediums and tell stories of the natural world in a new and exhilarating way.” 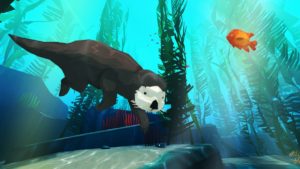 The VR experience begins in the Californian Pacific Coast with a mother sea otter as she searches for food in the waters. This takes the viewer on an exploration of the kelp forests before taking a journey to the depths of an oceanic trench and experiencing the way that animals live and behave. Within the experience, viewers will be able to come across a range of animals including plankton, giant squid, a sperm whale, and more.

The experience is available to download from Google Play and requires both a Daydream-ready smartphone and Daydream View.

“BBC Earth’s experience on Daydream makes exploring the wonders of our world more immersive and accessible than ever before,” said Kellee Santiago, senior producer for Daydream Apps. “It allows audiences to guide themselves, based on whatever takes their interest.”

BBC and Google Daydream take you under the sea in VR added by Newsroom on February 14, 2018
View all posts by Newsroom →