Following an expansion of its 5G tests to multiple cities around the United States — including Minneapolis in time for Super Bowl LII — AT&T recently announced that it expects to be the first US company to launch mobile 5G services in a “dozen markets” by late 2018. The carrier said that it’s “moving fast” to fulfil this promise, but hasn’t yet specified which new cities could be reached by the 5G service or how fast the speeds will be.

AT&T pointed towards an announcement made last month by international wireless standards body the 3rd Generation Partnership Project, in which the Project confirmed that the global mobile industry is ready to begin “full-scale development of 5G NR (new radio) for large-scale trials and commercial deployments as early as in 2019.”

AT&T explained that hardware, chipset, and device manufacturers can now start development on 5G technologies, and AT&T can provide mobile 5G services sooner “without compromising its long-term vision.” This means that the new network will be a true 5G service, unlike AT&T’s previous “5G Evolution” technology that was essentially a rebranded version of LTE.

AT&T’s 5G deployment will be aimed at consumers, and the carrier expects to trial 5G technology with businesses as well. In this release, AT&T boasted faster speeds and “much lower latency” on users’ smartphones as the selling point of the 5G technology. In addition to boosting connectivity speeds on smartphones, the company mentioned that it expects future 5G technologies to allow driverless vehicles to make better real-time decisions, enabling the cars to see around corners, through other vehicles, and at longer distances. 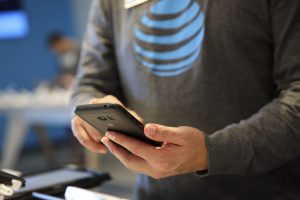 It’s believed that Apple is looking to prepare future iPhone and iPad models for 5G technologies, following an application submission to the FCC last year, but the exact purpose of Apple’s test remains unclear.

AT&T is also continuing to work on other wireless technology areas, including LTE, 5G Evolution, LTE-M for low-power wide-area coverage, Fixed Wireless Internet, Fixed 5G and AirGig, Fiber, and G.fast. AT&T rival carriers have also joined in on testing 5G technology, with Sprint saying its own wide-scale 5G network will launch by 2019, and T-Mobile aiming for nationwide 5G coverage by 2020.