By Newsroom on February 12, 2018Comments Off on Apple’s iPhone X film about a mother’s love goes viral in China

For Apple in China, there is plenty riding on the iPhone X.

The U.S. tech giant has lost share in the world’s largest smartphone market in recent years, as aggressive Chinese rivals like Huawei have made inroads. The iPhone X launched in China in November, and while some early data looks positive for Apple, the Chinese New Year period will be a key holiday for sales of the device.

For a new ad timed to the holiday, Apple brought out the big guns—recruiting acclaimed Chinese filmmaker Peter Chan to direct a short film. 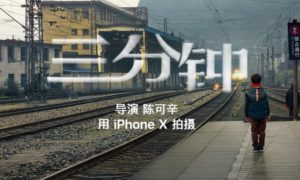 “3 Minutes,” it tells the story of a woman who works as a conductor on one of the longest train routes in the country. (Millions of people in China travel on crowded trains to be with their families over Chinese New Year.) Each year, this woman misses the holiday with her young son—but this time, she arranges to have her sister bring him to one of the train stops, so she can briefly see him.

Crucially, the entire film was shot on the iPhone X.

The film is scripted, but it’s based in truth—it is a real family, and the woman really is a conductor on the train.

The film is far from a straightforward, feel-good family tale. A sense of longing hangs over the piece, giving it an emotional depth that seems to have resonated in China, where it’s been viewed 68 million times in less than a week.

The countdown clock creates a sense of urgency—of love on a timer—and the boy’s efforts to impress his mother illuminate the closeness but also the distance between them. Their farewell at the end of the piece is complicated. Their three minutes together haven’t gone as planned, though of course they were never going to be able to communicate everything they feel for one another in such a condensed period of time. 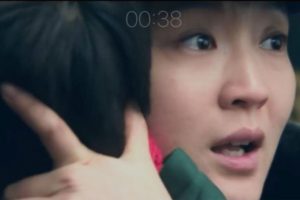 “As one of the most famous feature film directors in China, he had only made movies for the big screen, never for the Internet,” Myhren says. “We discussed the need for compressed storytelling, but left it open for Peter to determine the appropriate length that enabled the viewer to get to know the characters and tell the most compelling story.”

Apple brought the true story of the train conductor to Chan.

“This real story of a mother who only has three minutes to spend with her young son on a train platform moved all of us,” says Myhren. “We collaborated for a few weeks on how the story would play out. Peter added two wonderful aspects to the storytelling—the real time countdown clock, and the boy reciting his multiplication tables. The first helps build intensity, and the second helps shape the boy’s relationship to his mother—always wanting to impress her.” 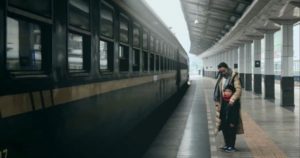 iPhone X enabled us to keep the shoot nimble, move easily through the train, float out the window, and walk quickly through the crowd shot from the little boy’s eye level,” he says. “But the quality of the iPhone X camera makes the film feel quite huge and cinematic.”

Chan had never shot a film on an iPhone, but seems to have become something of an expert in the meantime. In addition to “3 Minutes,” he also shot five “How to Shoot on iPhone X” videos that have 9 million views combined, Myhren says.

Apple’s iPhone X film about a mother’s love goes viral in China added by Newsroom on February 12, 2018
View all posts by Newsroom →