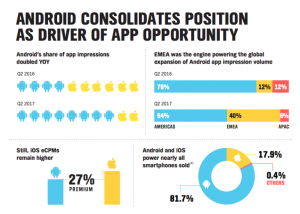 Mobile advertising has contracted in the Asia-Pacific region in the months following the global brand safety crisis, new research has found.

According to the PubMatic Quarterly Mobile Index report, the amount of Android app impressions in APAC has shrunk in volume by 50 per cent year-on-year in Q2 2017.

Although desktop header bidding remains the dominant medium for now, mobile header bidding is catching up fast with a growth rate of 285 per cent in Q2. 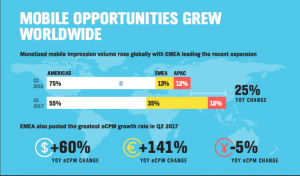 According to PubMatic, news publishers were the biggest drivers of mobile header bidding, accounting for 75 per cent of the growth.

The report also said that APAC only accounted for just 3 per cent of video impressions globally, while the Americas and EMEA accounted for 72 per cent and 25 per cent respectively.

PubMatic said in a press statement: “More publishers continue to embrace header bidding, a solution that gives them the power to escape the auction waterfall and unify demand sources to increase competition on an impression-by-impression basis.” 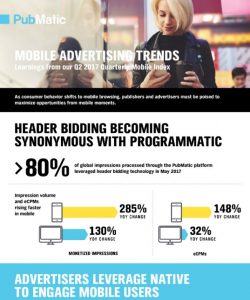 Meanwhile, company founder and CEO Rajeev Goel said: “The dramatic growth of mobile audiences worldwide has been a catalyst of header bidding innovation, from in-app capabilities to hybrid client- and server-side solutions. As mobile opportunities rise globally, we see holistic header bidding solutions becoming increasingly important to publishers, enabling them to reclaim control of their inventory.”

The report did not offer any explanations for the decline in APAC spending. Although the World Bank’s May report cited falling growth in China, the rest of South East Asia and the East Pacific was said be on a positive trajectory.

However, it was around March when concerns about brand safety erupted on a global scale when a number of advertisers ads from Google and YouTube in the UK.

These brands included Domino’s Pizza and Hyundai, who launched the boycott after a number of ads were placed next to content promoting extremism and hate speech.