By Newsroom on May 24, 2018Comments Off on Absolut launches global interactive selfie campaign in airports with the help of JCDecaux 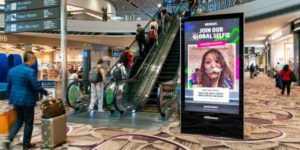 has launched a ‘Global Selfie’ campaign to celebrate the launch of its limited edition ‘Absolut World’ vodka.

The campaign invited travellers flying from Frankfurt and Singapore to upload a picture of themselves via Absolut.com/globalselfie with their name, age, city and recommend places they love eating, drinking and getting together with friends at in their home city.

The insider travel tips and selfies are then displayed on screens in terminals with flights departing to the cities mentioned. For example, selfies recommending places in Singapore will be shown in terminals at Frankfurt airport only where there are outbound flights to Singapore.

The selfies were then displayed against different-themed backdrops such as ‘Ready for Your Trip’, ‘Join our Global Selfie’ or ‘Unlock Local Hotspots’ and transformed into a photo collage.

“As the first of its kind, we’re excited to launch this unique digital campaign with JCDecaux, using smart technology to add to the celebration of togetherness that surrounds the launch of Absolut World,” said Lisa McCann, brand director of Absolut at Pernod Ricard global travel retail.

“It is the ideal platform to defy the distances between us and carve out new connections across international borders while truly enhancing the travel experience,”

JCDecaux also recently signed on McDonald’s as its first client in Singapore since winning the country’s bus shelters OOH pitch.

Absolut launches global interactive selfie campaign in airports with the help of JCDecaux added by Newsroom on May 24, 2018
View all posts by Newsroom →