Where Facebook is looking to put a lot more ads

By Newsroom on October 1, 2016Comments Off on Where Facebook is looking to put a lot more ads 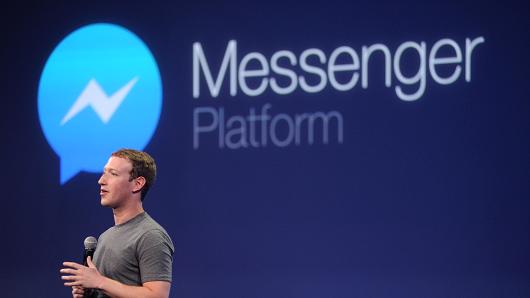 Facebook is already dominant in mobile advertising, and the company has the opportunity to become even more so through its messaging services — What’s App and Facebook Messenger.

The company sees natural fits for brands on its messenger apps, Facebook executives said during a press question-and-answer session during Advertising Week in New York.

“Consumers are naturally behaving with businesses [on Facebook Messenger],” said Andrew “Boz” Bosworth, Facebook’s vice president of engineering for ads and pages, at the event. “Marketers can take greater advantage of that.”

Bosworth said plans for monetization aren’t fleshed out, and right now the focus is on building a great consumer experience on its messenger apps. But there are natural behaviors that lend themselves to advertising. For example, Brazilian users already connect with restaurants using What’s App at a very high rate, he said.

“Our goal as a company is to make your Newsfeed experience great…. If we can make advertising work because it is great content for people, that’s where the win is,” said Sheryl Sandberg, chief operating officer of Facebook.

EMarketer projects that 2.19 billion people will use messaging apps by 2019. In February, What’s App announced it hit its 1 billion user mark worldwide. During Facebook’s 2016 Q1 call, CEO Mark Zuckerberg said 900 million people used Facebook Messenger, which was recently broken out into a separate app from Facebook.

Other popular messaging apps such as Line, WeChat and QQ have leveraged bots and other marketing tools for advertising revenue. Experts said bots can help brands have personalized conversations and give recommendations to consumers, who can chat from the comfort of their own device. Consumers are welcoming the virtual concierges, especially in Asian countries where the use of messaging apps is prevalent.

However, Facebook recently ran into a little bit of legal trouble with What’s App in Germany, when the Hamburg data protection commissioner ordered the company to stop collecting and storing data on the app’s users. He also asked the company to delete all information it had on its 35 million German users. The commissioner said that users should have the right to decide if they want to connect their What’s App account to Facebook.

Sandberg said that Facebook works with regulators around the world, and emphasised that What’s App’s users consent to using the app.

Where Facebook is looking to put a lot more ads added by Newsroom on October 1, 2016
View all posts by Newsroom →