By Newsroom on November 12, 2018Comments Off on Weibo used by nearly 25% of Chinese population, according to eMarketer

Weibo usage will grow to 340.1 million people in China this year, accounting for 24.6% of China’s population, according to eMarketer.

The social networking app, which is referred to as China’s Twitter, will grow by more than 17% in 2018. This growth will continue over the next couple of years with Weibo users expected to pass 400 million by 2021.

The growth is being reflected in Weibo’s ad revenues which are also on the rise, eMarketer predicts Weibo digital ad revenues will grow 65% this year to reach $1.54bn.

Shelleen Shum, forecasting analyst, eMarketer, said, “Weibo has evolved into an entertainment platform that encompasses the features of Twitter, Pinterest, Instagram, Reddit and YouTube rolled into one. Weibo has remained competitive by innovating away from text-based content to more visually rich formats such as videos, live streams and photos. Its partnerships with local TV networks, foreign sports leagues, celebrities and online influencers have allowed it to create a rich library of engaging content that caters to a variety of interests.” 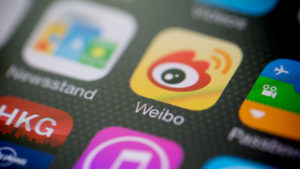 While Weibo is often compared to Twitter, the Chinese app has experienced stronger growth in users. Weibo, which launched in 2009, saw accelerated growth from the beginning attracting 72 million users in its first three years, well ahead of Twitter which had attracted just 7.9 million users in the US three years after its debut.

The Chinese app suffered a fall in users in 2014, reporting a drop in 28m users but has rebounded in recent years.

“Twitter has taken strides in a similar direction to Weibo, but it was slower to move away from text-based content and has failed to integrate these different aspects as seamlessly as Weibo,” Shum concluded.

Weibo used by nearly 25% of Chinese population, according to eMarketer added by Newsroom on November 12, 2018
View all posts by Newsroom →