By Newsroom on December 28, 2017Comments Off on WeChat accounts could double as state IDs in China 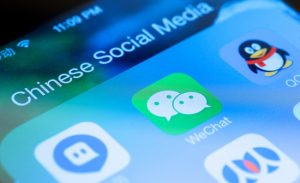 WeChat users in China will soon be able to use the chat app as a state-issued ID card. Financial Times reports that those living in Guangdong’s capital city Guangzhou will be able to use facial recognition to link their identities to the app in the Nansha district this week. The feature will apparently roll out across the country in January.

FT notes that the ID-linking system is a bit limited as far as on-device registrations go. You’ll be able to log into an internet cafe with the limited-function, on-device registration. For anything more involved that’d require state ID, however, you’ll need to hit a registration hard point in the city. After that, your phone will cover “most functions” you’d need a typical ID card for. Like registering a business, for example.

While this sounds like the type of future we’ve expected, the feature’s privacy implications can’t be understated. Linking someone’s face to what’s essentially the de facto way to communicate in China is a bit scary considering how heavily the government polices the app.

WeChat accounts could double as state IDs in China added by Newsroom on December 28, 2017
View all posts by Newsroom →