By Newsroom on March 19, 2018Comments Off on Two-Thirds of voice-assisted device owners never purchase through them, according to Episerver 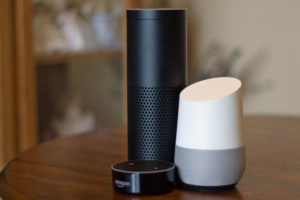 though it seems everyone is talking about voice-assisted devices and smartwatches, the majority of consumers don’t own these new devices, and even fewer use them to complete purchases, according to a recently released study by Episerver.

For its annual “Reimagining Commerce: Global Findings” report, Episerver surveyed 4,000 online shoppers in four global markets and found that new devices like smartwatches and voice-assisted devices have yet to catch on for shoppers, while more established devices like smartphones have gained a foothold. In fact, 75 percent of all consumers report using smartphones to browse, and over half (57 percent) report making purchases on these devices. Additionally, 29 percent of smartphone owners report browsing for purchases on their smartphone daily and half report doing so weekly, indicating a sizeable base of highly connected consumers.

“While consumers are willing to shop across channels now, they’re still warming up to new devices like voice assistants and smartwatches,” said Ed Kennedy, director of digital commerce strategy at Episerver. “It’s up to brands and retailers to set the tone here and nail down the search experience on these devices to ease customers into shopping with new technologies. Regardless of device, consumers expect frictionless and personalized shopping experiences that are consistent from one device to the next, and the brands who get this right across devices will emerge as the commerce leaders of tomorrow.”

While the adoption of new devices for shopping has yet to reach saturation, the report found that consumers are open to a more diverse array of brand interactions and technology-driven experiences.

Over half (59 percent) of shoppers reported they have used or would be interested in using chat windows for assistance when shopping online, and 57 percent reported they have tried or would be interested in trying smart mirrors for assistance when shopping in-store. Additionally, 40 percent reported having tried or being interested in augmented and virtual reality during their shopping experience, indicating an opportunity for retailers to create memorable experiences if they can implement this technology correctly.

“Today’s shoppers are interested in technology-rich experiences, but only if it’s done right,” said Joey Moore, director of product marketing at Episerver. “Rather than introducing novel technology for the sake of doing so, brands should implement tools like smart mirrors in-store and facial recognition sign-in online to make shopping easier, fast, more convenient and engaging.”

Other key findings from the report include:

• Almost a third of shoppers (29 percent) browse on their smartphones daily, but only 27 percent of those shoppers go on to make a purchase on their devices at the same frequency.

• Of shoppers who don’t want to try new technology functions again, half (51 percent) report it’s because these technologies did not improve their experiences.

• Thirty-five percent of consumers have tried or would be interested in trying drone delivery.

Two-Thirds of voice-assisted device owners never purchase through them, according to Episerver added by Newsroom on March 19, 2018
View all posts by Newsroom →