By Newsroom on July 30, 2018Comments Off on Toyota announces driverless-based mobility plans for Tokyo 2020 Olympics 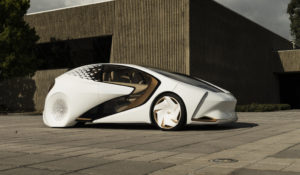 Toyota will put on a technological show for the world when all eyes are on Tokyo for the 2020 Olympic Games.

This will include the demonstration of a Level 4 self-driving car to highlight Toyota’s goal of providing personal transport for everyone, including those that are too old to drive or suffer from poor vision.

Toyota says its self-driving cars will be in operation in defined areas located at the Tokyo Water Front City and Haneda areas of Tokyo. These will be fully self-driving cars requiring no intervention by a human driver.

Also on hand will be the e-Palette concept that we first saw in January at the 2018 Consumer Electronics Show. Toyota says the e-Palette will be used for transportation of athletes around the Athlete’s Village.

Another Toyota concept, the Concept-i unveiled at the 2017 Tokyo auto show, will also be present. This one will demonstrate how a car’s artificial intelligence system will be able to recognize a drivers’ emotions and preferences and make conversation with them.

The Level 2 self-driving system can handle almost all aspects of highway driving from the on-ramp to the exit, such as merging into highway traffic, lane keeping, speed adjustments, lane changes, overtaking and maintaining vehicle-to-vehicle distance.

Toyota has been slow and cautious in the field of self-driving technology but it’s clear the automaker is catching up fast. It’s been testing self-driving cars at shared sites such as California’s GoMentum Station and Michigan’s Mcity locations for several years and in May announced plans to build its own test site at Michigan Technical Resource Park at Ottawa Lake, Michigan.

Other firms are much further ahead, though. Waymo will have a commercial self-driving taxi service up and running in Phoenix, Arizona later this year. Meanwhile, General Motors and Daimler (in partnership with Bosch) plan to have their own self-driving services available in 2019.