By Newsroom on November 5, 2018Comments Off on Tencent to launch wearable video-recording sunglasses 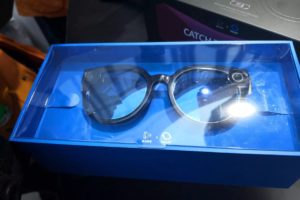 The glasses feature camera lens in the frames which enable the wearer to film video. The glasses will go on sale on 11 November, coinciding with Tencent’s rival Alibaba’s annual 11.11 shopping extravaganza.

The glasses have been compared to Snap’s smartglasses with market experts pointing to Tencent’s status as a long-term investor in Snap.

The camera shares its name with Tencent’s short video app Weishi, which means ‘micro videos’ in Chinese. Tencent is hoping to gain a larger slice of China’s exploding short video market which is dominated by Douyin (Tiktok) and Kuaishou. In September, Weishi was the most popular free app in Apple App Store.

Tencent to launch wearable video-recording sunglasses added by Newsroom on November 5, 2018
View all posts by Newsroom →