By Newsroom on September 7, 2016Comments Off on Ted Baker and Google team up for interactive campaign 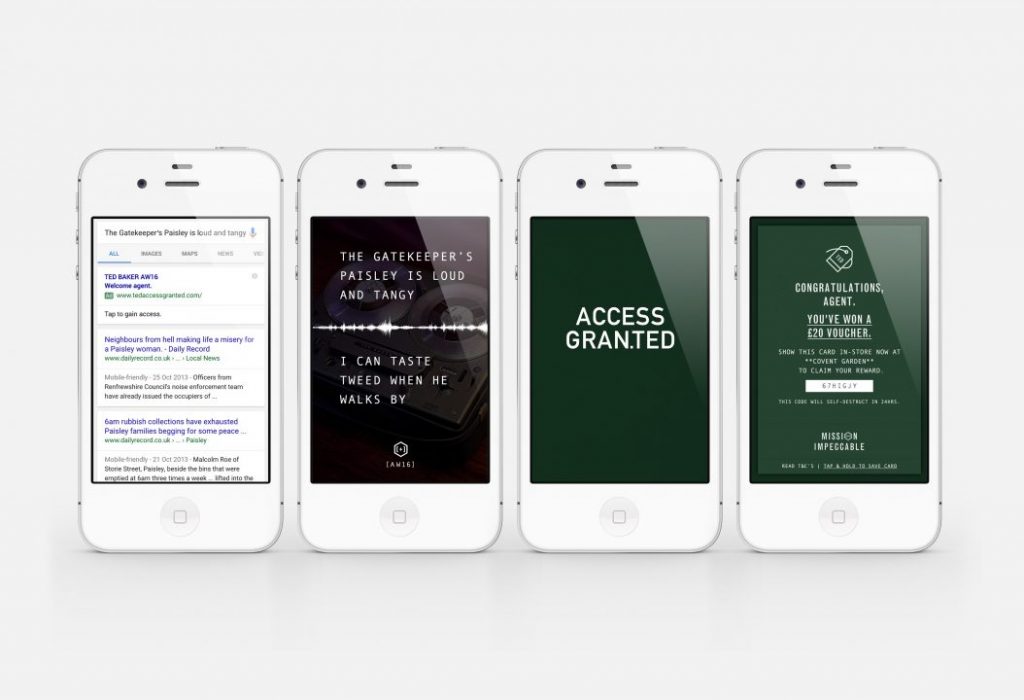 Ted Baker is moving into the digital age with a new autumn/winter push that includes the brand’s first ever shoppable film and a revamp of its in-store experience.

Dubbed “Mission Impeccable,” the campaign, created by London agency Poke, is based on the theme of espionage, a nod to the retailer’s British, James Bond-esque feel. It includes a shoppable film directed by Guy Ritchie as well as the first-ever fashion retail application of the Google App’s voice search.

“The shift toward needing to have a fully joined up omnichannel offer is fundamental,” said Craig Smith, global brand communication director at Ted Baker. Baker said that the impetus to launching Mission Impeccable was a need for the brand to “up its game” when it came to both online and offline channels.

As users watch Mission Impeccable, they can click things the actors are wearing to “add to bag.” In an unusual move, Ted Baker is making the film available to retail partners and department stores as well to play on their websites. That’s being done, according to Nik Roope, creative director at Poke, so department stores can collect data as well. “We’re taking what Ted Baker gets so right in a physical retail environment and taking that attitude into e-commerce,” said Roope.

The other major aspect of the campaign is a redo of the company’s stores to integrate Google Voice. People can speak certain words, written on the store windows, into the Google Voice app and get clues in return. Once clues are solved, they can get prizes inside the store. It necessitates saying code words into a phone while staring at a window, but Roope says it’ll be worth it. It’s also geofenced — you have to actually be near a store for it to work — and chronofenced — if you are out near the store at 3 a.m. when it’s closed, it won’t work.

That’s the latest move by Google to further infiltrate the fashion world. Google is now trying to create search carousels that are “curated” by couture brands that will appear on top of search results. And brands on see-now-buy-now schedules will let people shop directly from the Google search page.

For Ted Baker, the move towards a more tech-first campaign is a long time coming. Smith said that the brand still doesn’t invest a lot of money in above the line marketing spend, but has 55 percent of its shoppers coming to it via mobile phones.

Ted Baker and Google team up for interactive campaign added by Newsroom on September 7, 2016
View all posts by Newsroom →