By Newsroom on May 17, 2018Comments Off on Snapchat starts showing six-second ads that viewers can’t skip 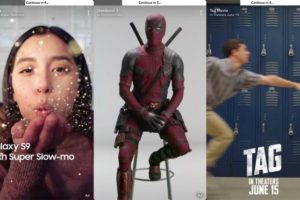 viewers are seeing a new type of ad—ones they have to watch.

On Monday, the first forced-view ads, meaning they can’t be skipped, started popping up on the app, promoting movies like “Deadpool” and “Adrift” and products such as Samsung’s Galaxy S9 and Snapple.

After basing its initial ad business on an entirely voluntary viewing format, Snapchat in April confirmed that it would start offering non-skippable ads for the first time.

The new ads appear like commercials in the middle of a show, similar to TV, a medium Snapchat has tried to emulate but update for the mobile age.

Indeed, these six-second spots are only available in Shows, the professionally produced, episodic series from top media partners like NBCUniversal, Walt Disney Co. and Viacom that appear in Snapchat’s Discover section — programs like “Phone Swap” from Elisabeth Murdoch’s Vertical Networks and ESPN‘s version of “SportsCenter” for the app.

Forcing viewers to sit through ads is a big step for the company that once had an aversion to any commercials users couldn’t control. Snapchat’s video ads have been immediately skippable since they first arrived in 2014.

But the company had to contend with pressure from brands that were not happy with short average view times on their ads—less than 2 seconds on average, according to top Snapchat advertisers, who spoke on condition of anonymity.

The six-second ad also appeals to the studios and networks creating the shows. Networks like Fox and AMC are creating six-second ad space on TV as they try to appease a commercial-weary audience.

Some networks could find it easier to sell ad space in their Snapchat shows if they can offer the six-second format across platforms. Snapchat’s media partners are able to sell their own ads, but most ads are bought through Snapchat’s automated ad platform.

Beyond the risk of annoying Snapchat users, the ads have some downsides: They don’t link to longer videos or e-commerce experiences like Snapchat’s typical video ad units.

Snapchat is not the only social platform that has compromised in order to appease brands. Facebook recently started showing pre-roll video ads before the main content, even though Mark Zuckerberg had banned them for years.

Snapchat starts showing six-second ads that viewers can’t skip added by Newsroom on May 17, 2018
View all posts by Newsroom →