By Newsroom on August 22, 2018Comments Off on O2’s Weve pulls out of delivering mobile ads 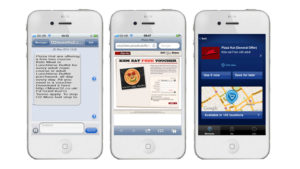 O2-owned Weve is pulling out of delivering mobile ads as the mobile operator focuses instead on using consumer data only for its own marketing and brand loyalty purposes.

From August 21, Weve said it will stop taking new bookings for mobile advertising campaigns. In a statement, O2 said the move would allow it to “solely focus messaging on O2 services and customer loyalty”.

Weve, meanwhile, will continue to work with its clients to ensure any existing campaigns already in place are delivered.

Martin Weller, managing director of Weve, said: “While Weve is, for now, stepping back from delivering mobile advertising, our customers and partners will continue to receive the highest levels of service and delivery for existing campaigns, while we explore and transition to a new business model.”

Weve was set up as a joint venture between O2, EE and Vodafone in 2013, and had ambitions to challenge Apple, Google and Facebook’s dominance in mobile by moving into mobile display ads and data-sharing for programmatic trading.

Data from mobile users who opted in to receive mobile marketing communications from the three networks was made available to marketers, with information ranging from call history to real-time location data. Previously, mobile marketing was limited to messaging people in geo-fenced areas.

Brands, meanwhile, would be able to use Weve to launch joined-up mobile campaigns, rather than one-off pushes run through the individual operators.

Before a trial of display ads in 2015, Weve had specialised in sending text-message ads for hundreds of brands. The company’s then commercial director, Nigel Clarkson, said Weve’s first-party data was only rivalled by Apple, Google and Facebook. Clarkson left at the end of 2015 to join Yahoo (now Oath) and his replacement, Tom Pearman, left two years later for Apple and was replaced by Weller.

While opportunities to employ data in mobile marketing have grown in recent years, so too has ad-blocking on digital devices. eMarketer’s latest data shows that the UK now has 12.2 million users of ad blockers – 22% of internet users. Of these, 4.6 million use ad-blocking software on a smartphone, compared to 10.9 million on desktop.

Three’s challenge to the industry was followed by O2 chief executive Mark Evans’ suggestion that it would give users “more control” to reduce the number of ads they see on a mobile device.

Nevertheless, mobile adspend in the UK has continued to surge as average daily smartphone usage has climbed to two hours. In 2017 mobile spend overtook TV for the first time and reached £5.22bn, according to the Advertising Association/Warc Expenditure Report.

O2’s Weve pulls out of delivering mobile ads added by Newsroom on August 22, 2018
View all posts by Newsroom →