By Newsroom on September 8, 2017Comments Off on Mobile Posse Unveils Original Research About the Mobile User Journey 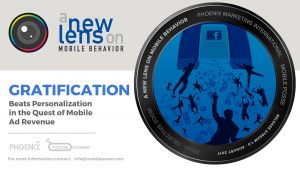 Mobile Posse, innovator of an intelligent content discovery platform that enhances the mobile experience while boosting ad monetization for mobile carriers and device OEMs, announced a new research titled “A New Lens on Mobile: Gratification Beats Personalization In the Quest of Mobile Ad Revenue,” the first of an ongoing series of original research analytics about the mobile user journey in partnership with Phoenix Marketing International (PMI), a leading global marketing research firm.

Unlike traditional mobile analytics that focus on where users spend time, these new insights analyze user session metrics from the beginning of their usage session with the device. The initial research focuses on never-before-seen Facebook metrics that reveal what instant gratification means in the mobile context as market players vie for consumer attention every time consumers unlock their phones. Findings from this latest research include:

“This ongoing behavioural research series isn’t just about popular mobile applications or advertising trends. Our Facebook data proves being first is imperative in the mobile content discovery space. It also shows that mobile carriers and device OEMs can compete for mobile ad revenue,” said Jon Jackson, Mobile Posse founder and CEO. “Mobile players can rebuild their efforts to have a more significant presence in the user journey, and once you understand the user journey you can find new ways to provide value and unlock revenue.”

“To date, very little insight had been available into mobile user behaviour and specifically the first-screen experience,” said John Schiela, ‎President Converged Technology & Media, PMI. “The research is groundbreaking because it makes the case for carriers to take back their rightful mobile ad revenue from the likes of Facebook and Google.”

The full report, “A New Lens on Mobile: Gratification Beats Personalization In the Quest of Mobile Ad Revenue” can be downloaded here.

Mobile Posse Unveils Original Research About the Mobile User Journey added by Newsroom on September 8, 2017
View all posts by Newsroom →