By Newsroom on September 9, 2016Comments Off on McDonald’s Unveils World-First Mobile Experience with the Monopoly Game

McDonald’s Australia has launched what is claimed to be a world-first mobile experience for its largest promotion, with the Monopoly Game at Macca’s app, transforming the entire promotion into a mobile gaming experience that converges the digital and physical worlds.

Going mobile for the first time, the campaign and mobile gaming experience was led by VML Australia, activating the breadth of specialist partners including TMS, Creata, DDB Track and Leo Burnett to deliver the end-to-end promotion.

Building on the traditional ‘peel n reveal’ mechanic, customers can now also play digitally by simply scanning in a new Chance Card for another 1 in 5 chance to win instantly. The home screen of the app also doubles as a virtual game board allowing players to scan and stash all of their property cards. While the player’s ‘stash’ becomes a digital wallet for both major prizes and instant win food offers that you can swipe-to-redeem in restaurant at any McDonald’s across the country. 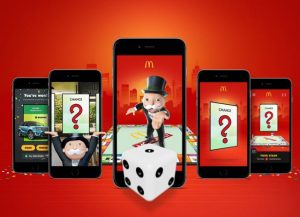 In the first 24 hours, the Monopoly Game at Macca’s app has rocketed to number one on the app store, making it one of the fastest growing branded apps in Australia to date, and generating over 200,000 winners already.

The first “Tap to Play” gaming experience sees game cards fly into the real-world via the phones camera and augmented reality before letting players choose a card to “Tap” for the chance to win instantly.

The second “Spin to Win” game brings a more physical challenge to life where players spin the card in the hope of uncovering prizes.

While the third “Dice Roll” game challenges players to roll that perfect combination to land on an array of fantastic prizes across the virtual monopoly game board.

Mark Wheeler, director of digital, McDonald’s Australia said: “We are continuing to engage our customers through digital and the Monopoly Game at Macca’s was the perfect opportunity to offer an enhanced game experience via mobile. We are so excited to offer our customers the opportunity to win even more prizes with the app and we hope they have fun playing with it.”

Aden Hepburn, managing director and ECD, VML Australia said: “It’s such an incredible opportunity to take a McDonald’s favourite and create a mobile-first monopoly gaming experience. It demonstrates how progressive the business is and its focus on creating innovative and engaging digital experiences for its customers.”

McDonald’s Unveils World-First Mobile Experience with the Monopoly Game added by Newsroom on September 9, 2016
View all posts by Newsroom →