By Newsroom on May 14, 2018Comments Off on Instagram launches its latest emoji slider feature 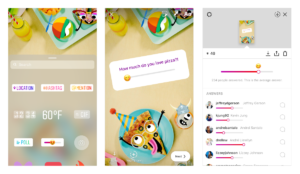 Facebook-owned photo sharing platform Instagram has launched a new variation of its popular poll sticker for use in its Stories feature: the emoji slider. The new sticker lets people ask and answer questions with an animated emoji that is designed to give polls more emotional context and allow for more meaningful feedback.

Polling has proved a successful feature within the Instagram community, and the emoji slider aims to capitalise on that popularity and provide users with a new way to engage with each other. Users can ask followers a wide variety of questions, which can then be answered by sliding a chosen emoji to the level they want. Like the poll sticker, followers will be able to respond as part of the Stories feature, and see the current average of how others have responded.

To add an emoji sticker within Stories, users select from the sticker tray after taking a photo or video. It can then be placed anywhere within the image or video, and both the question and the emoji customised. Friends and followers can respond to the slider as soon as its shared.

The new feature, which will be released as part of Instagram version 44 in Apple’s App Store and Google’s Play Store, is the latest addition by Instagram aimed at boosting engagement among its users and competing with rival service Snapchat.

Instagram launches its latest emoji slider feature added by Newsroom on May 14, 2018
View all posts by Newsroom →