Google speeds up mobile adverts with ‘Amp For Ads’

By Newsroom on July 22, 2016Comments Off on Google speeds up mobile adverts with ‘Amp For Ads’

Google is bringing its Accelerated Mobile Pages (AMP) technology to ads, as the web giant looks to boost its mobile revenue.

In October 2015, the firm launched its AMP project to help deliver speedier mobile content for select publishers. Now, the company has introduced a version of AMP tailored specifically for advertising content, called A4A (Amp for ads) .

“Amp only animates things that are visible on the screen,” Malte Ubl, the project’s tech lead, blogged. 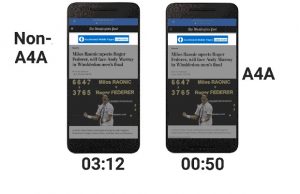 “Being new and special purpose technology, [it] can pinpoint when animations are needed and thus further reduce CPU [central processing unit] usage and battery consumption. Similarly, if Amp is unable to stabilise the frame rate, it will turn off animations. This ensures that every device gets the best experience it can deliver and makes sure that ads cannot have a negative impact on important aspects of the user experience such as scrolling.”

Unlike tradtitional web ads, the new A4A format separates ad requests from ad rendering, allowing for faster ad rendering at no additional CPU or memory cost. Additionally, CPU usage will be limited to on-screen ads to save battery life.

A4A ads work by retricting the use of Javascript, which is commonly used to track users’ behaviour and automate which ads should be placed where.

Instead, Amp provides its own activity measurement tools, which are said to be much more efficient.

Google demonstrated what’s possible with AMP for ads alongside an AMP article:

Details of the experiments were published on the company’s AMP project blog.

The A4A initiative’s technology is already used by the BBC, the Guardian, the Wall Street Journal and many other news sites to make their stories appear up to 10 times faster than those produced in HTML code.

There is early code for an implementation of AMP-powered ads from Google’s AdSense ad network, and the plan is to also add support for Google’s DoubleClick ad exchange. Google said the A4A format will eventually support all ad networks.

That figure included banners and animations placed via the Google Display Network – which would be affected by this project – as well as other types of ads, such as search result links and YouTube pre-roll clips, which would not.

Google speeds up mobile adverts with ‘Amp For Ads’ added by Newsroom on July 22, 2016
View all posts by Newsroom →