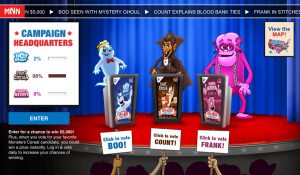 General Mills is piggybacking on the anticipation surrounding the upcoming presidential election by asking consumers to visit a mobile-optimized microsite and vote for their favourite of its cereal brands’ monster mascots for a chance to win a $5,000 grand prize.

Franken Berry, Count Chocula and Boo Berry are all in the running for the title of America’s favourite cereal monster this fall, with each mascot running on his own platform. Mobile users seeking a bite-sized piece of distraction can visit MonstersVote2016.com to read each monster’s campaign goals and cast a vote for their favourite.

“While it’s hard to say what boost brands can see from piggybacking on elections, it’s certainly a well-worn gimmick, with Jet Blue, Pop-Tarts, Burger King, and Legal Seafoods being just a few of the brands riffing on this year’s race,” said James McNally, senior manager of business development at Prolific Interactive. “Ads have a few basic hooks: they emphasize value, compelling product, lifestyle appeal, or cultural relevance.

“If tying into the election can give a campaign some cultural relevance – and align the viewer and brand as bemused observers – then it’s a win.” 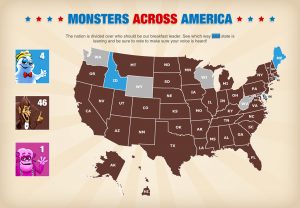 As individuals ponder their own choice for the presidential candidate, General Mills is hoping to add a lighthearted component to election anticipation with its monster-themed contest.

Now through October 31, any United States resident aged 13 years and up can vote for their favourite monster and receive a chance to win the grand prize of $5,000, as well as other branded gear.

The winner of America’s favourite monster contest will be revealed on November 1, while the sweepstakes will end on June 1, 2017.

Consumers can visit the campaign’s microsite. There, they will see an animated stage, on which all three cereal mascots stand behind their respective podiums. A small poll widget is visible in the bottom left corner, showcasing the percentage of votes each monster has garnered so far.

Individuals who already have a favourite cereal monster can click on his respective name to cast their vote. Undecided consumers can get to know the monsters by scrolling down and clicking through three slides, which detail each character’s platform and pros and cons. 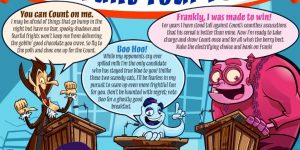 For instance, Boo Berry promises to become consumers’ dedicated breakfast leader by enacting full transparency in office. However, his cons include using scare tactics and being hard to pin down.

Meanwhile, Count Chocula’s pros include being very accountable and batty for breakfast, though he can be a pain in the neck and draining to chat with.

Lastly, Franken Berry’s platform reveals he is full of energy and always frank, but often relies on shock value and is scared of nearly everything.

Fans of the cereal brands can also download campaign posters from the microsite. 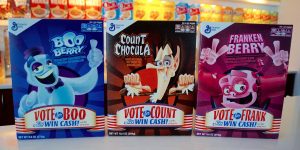 Consumers must register to vote by inputting their name, email, date of birth and ZIP code into a pop-up form on the microsite. This will enable them to receive an entry into the accompanying sweepstakes, which will award one grand prize winner with $5,000.

General Mills is no stranger to mobile-focused activations centering on its popular cereal mascots.

Additionally, General Mills’ Trix brand hopped into the smartphone era last fall via a mobile-driven campaign to find a real rabbit to represent the cereal and drive awareness of a new initiative to remove artificial flavours and colours. 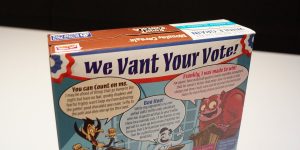 While the monster-themed election will likely resonate with cereal fans, General Mills could boost the campaign’s reach even more by having a stronger presence on social media.

“Basing a campaign around a microsite (like General Mills is doing) is challenging, and it requires a truly transcendent microsite experience,” Mr. McNally said.

“A better strategy for this type of campaign would revolve around mobile and social: users want bite-sized content that is funny and topical, and they want it served to them in their social channel of choice (i.e. Snapchat, Instagram).”