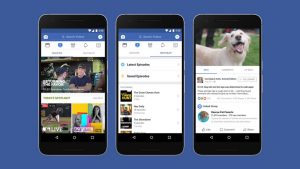 Facebook is mounting its first direct challenge to YouTube and established TV networks with the launch of its own dedicated video channel designed to bring a degree of professionalism to a segment that has thus far been dominated by home videos, amateur content and short clips of material available elsewhere.

As such the social network’s 2 billion monthly users will now be presented with a ‘watch’ tab from which a range of shows, many of them funded directly by Facebook, can be viewed.

A key differentiator for the service, unsurprisingly for a social network, will be the social aspect with content automatically curated to reflect the tastes and preferences of people within your own social sphere. It won’t be a strictly passive affair, however, with the network keen to encourage interaction via comments and membership of groups for specific shows.

Announcing the launch Facebook founder Mark Zuckerberg said: “Watching a show doesn’t have to be passive. It can be a chance to share an experience and bring people together who care about the same things.”

Facebook is understandably eager to tap into the lucrative video market but faces a fight on its hands to replicate the success it has had in the social sphere given entrenched competition from the likes of Netflix and old media giants such as Disney, which revealed its own streaming intent.

Facebook challenges YouTube and TV with dedicated video service added by Newsroom on August 10, 2017
View all posts by Newsroom →