eMarketer on Understanding Teens and their Smartphone Habits

By Newsroom on September 6, 2017Comments Off on eMarketer on Understanding Teens and their Smartphone Habits 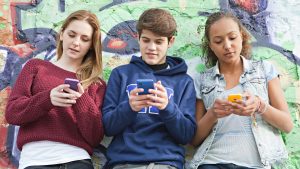 Yes, teens are digital natives. But that’s just half the story of what makes teen life so different now from a generation ago. Coming of age at a time when smartphone ownership is the norm, today’s teens are mobile natives as well. The constant connectedness a smartphone enables—or imposes—is a central fact of life for them.

Though teens still lag behind young adults, a large majority now have smartphones. And for those who have one, it drives their daily digital activity, as explored in eMarketer’s latest report, “US Teens and Their Smartphones: The All-Purpose Device for Liking, Snapping, Ad Avoiding, Shopping and More.” 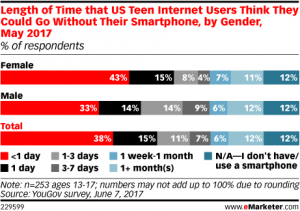 Older teens are more likely than younger teens and tweens to have a smartphone, so penetration is higher if one excludes 12-year-olds. December 2016 polling by the Associated Press-NORC Center for Public Affairs Research identified 89% of 13- to 17-year-olds in the US as smartphone users.

Then again, as feature phones fade from the marketplace—and as hand-me-down phones from parents have become more likely to be smartphones—the age at which youngsters first get a smartphone is declining. In a March 2017 report by Think with Google (based on August 2016 polling of US internet users by Ipsos), respondents ages 13 to 17 who have smartphones reported getting their first one at a median age of 12. “Now they have established habits by age 13,” said Jason Dorsey, co-founder and millennials and Gen Z researcher at The Center for Generational Kinetics.

Once they get a smartphone, teens are true to stereotype in becoming very attached to it. A YouGov survey in May 2017 illustrated this when it asked 13- to 17-year-olds in the US how long they could go without using their smartphone. Nearly four in 10 said they could not make it through a single day. 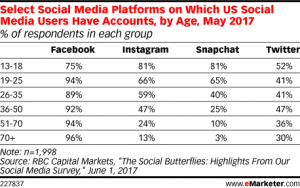 The smartphone camera has become central to teens’ social interaction, as reflected in the rise of camera-centric platforms like Snapchat and Instagram. Teens have not abandoned Facebook, but the time and emotional energy they spend on it has declined. And Facebook penetration among US teens is on a slightly downward trajectory.

Underlying teens’ extensive use of smartphones for social networking is the scope of their overall engagement with social media. eMarketer estimates that 70.8% of 12- to 17-year-olds in the US will use social networks at least once a month this year.

eMarketer on Understanding Teens and their Smartphone Habits added by Newsroom on September 6, 2017
View all posts by Newsroom →