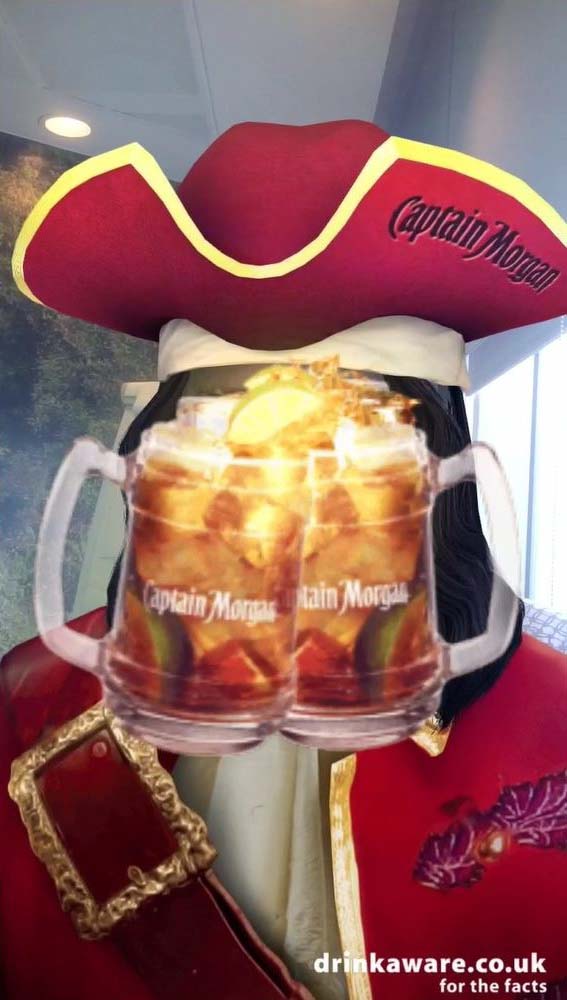 Drinks giant Diageo has suspended advertising on Snapchat across the world after its use of a Lens was criticised by the UK ad watchdog.

The Advertising Standards Authority investigated the ad for rum brand Captain Morgan on its own initiative, and decided it was unacceptably likely to appeal to, as well as be seen by, children.

The ruling prompted a decisive reaction from Diageo and left Snapchat on the defensive about its age verification and filters, which it insists it has improved since the ad was run in June 2017.

The ASA admonished Diageo on two separate breaches of the advertising code, each grounds enough for a ban.

Firstly, it ruled the Captain Morgan lens was likely to appeal to children. “The specific interactive and augmented elements of the lens, such as the user’s face being made to look like a buccaneer, the clinking glasses, references to “Captain” and cheering [sounds], were likely to appeal particularly to those under 18,” it said.

Secondly, it criticised Diageo’s lack of care over whether under-18s might see the Lens. It accepted that Diageo had only targeted Snapchat users over 18, but it said this was inadequate because the targeting was based solely on users’ self-reported ages.

It stated that the platform was popular with under-18s, citing Ofcom research showing that 58% of children aged 12-15 years old said they had a Snapchat account in 2017, and that 34% of 8-11 year-olds said they had one in 2016, despite the minimum age on the platform being 13.

Diageo is no stranger to Snapchat, having used it for ads for Guinness and Smirnoff, but the ASA ruling has made it particularly cautious.

A Diageo spokeswoman said: “We have a strict marketing code, take our role as a responsible marketer very seriously and acknowledge the ASA’s ruling. We took all reasonable steps to ensure the content we put on Snapchat was not directed at under 18s – using the data provided to us by Snapchat and applying an age filter. We have now stopped all advertising on Snapchat globally whilst we assess the incremental age verification safeguards that Snapchat are implementing.”

A spokeswoman for Snap said it was disappointed with the ruling; that since the ad had run in June, it had introduced more options for age targeting; and that it was working with Diageo to educate the drinks company on these.

She added: “We disagree that Diageo intentionally directed its Lens to an underage audience when it applied the accurate 18+ targeting available at the time. The ASA acknowledges the evidence we provided showing that ages supplied by Snapchatters are a robust way to age-restrict ads. Snapchat now offers among the most sophisticated targeting in the industry and by introducing new tools such as Audience Lenses and incorporating additional signals into our targeting, advertisers have a reliable and flexible way to ensure their ads reach the right audience.”

The spokeswoman dismissed the idea that a significant number of Snapchat users had incorrectly stated they were over 18, adding that there was no incentive for users to do this, and that it had provided first– and third-party data as evidence that users’ reported ages were reliable.