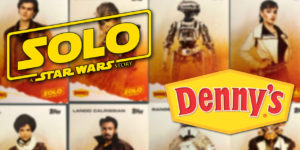 part of its collaboration with Lucasfilm for the much-anticipated release of “Solo: A Star Wars Story,” Denny’s is giving fans the opportunity to take a virtual seat in the Star Wars universe and roll a pair of dice like Han Solo. Launching on May 4, Denny’s “Smuggler’s Dice” sweepstakes offers players the chance to win a number of instant prizes like free pancakes from Denny’s and Fandango Movie Codes, and enter a grand prize sweepstakes for the chance to win a “Solo: A Star Wars Story” movie poster signed by Alden Ehrenreich and Donald Glover. Fans can try their hand at “Smuggler’s Dice” on Dennys.com, where they can also find out more about Denny’s bold new menu inspired by the film and exclusive “Solo: A Star Wars Story” trading cards benefiting No Kid Hungry. 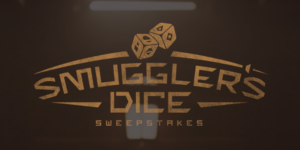 of Star Wars and Denny’s may never be able to pilot the Millennium Falcon like Han Solo, but now they will be able to digitally roll a pair of dice like Solo in a virtual version of the Star Wars universe–and potentially win big while doing so,” said John Dillon, chief marketing officer for Denny’s. “We are thrilled to launch this sweepstakes as part of our collaboration with Lucasfilm for ‘Solo: A Star Wars Story’. We were able to create a truly authentic Star Wars experience on Dennys.com and we look forward to unveiling the experience on Star Wars Day.” 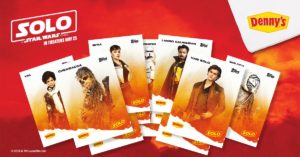 can use their smartphone, tablet or computer to visit Dennys.com where they will have the opportunity to play “Smuggler’s Dice” online on a table similar to the one that Han Solo and Lando Calrissian sit at in “Solo: A Star Wars Story.” With each roll, players have the chance to win a number of instant prizes including vouchers for favorite Denny’s dishes, Fandango Movie Codes, and more. Fans who play will also be entered for the chance to win the grand prize: one of two “Solo: A Star Wars Story” movie posters signed by the stars who play the legendary adversaries from the film. 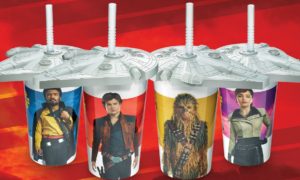 between rounds, Star Wars fans can also fuel up with Denny’s new, bold menu inspired by “Solo: A Star Wars Story.” Available all day, every day, Denny’s new menu includes the Co-Reactor Pancakes, featuring fresh strawberries, strawberry sauce and whipped cream, plus a side of Crystal Crunch Rocks and warm citrus sauce to make them pop. Denny’s out-of-this-world menu also includes the Blaster Fire Burger, a 100 percent beef patty topped with Chipotle Gouda cheese, bacon and spicy Ghost Pepper sauce on a brioche bun. Guests and Star Wars fans may also dive into a number of other dishes like the Two Moons Skillet and Lightspeed Slam.

Additionally, Denny’s is also offering diners the chance to collect “Solo: A Star Wars Story” trading cards, only available at Denny’s with net proceeds benefiting No Kid Hungry, a nonprofit that aims to end childhood hunger in America. Fans can also enjoy their favorite beverages in Denny’s limited edition collectors cups, featuring characters from “Solo: A Star Wars Story” and topped with a Millennium Falcon lid.

Denny’s puts fans at the table to roll dice inspired by “Solo: A Star Wars Story” and win big added by Newsroom on May 4, 2018
View all posts by Newsroom →