By Newsroom on September 13, 2018Comments Off on BBC News to launch weekly show on Facebook Watch 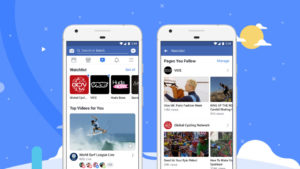 BBC News is launching a weekly news programme on Facebook Watch. Set to launch later in 2018, Cut Through The Noise will be the social media platform’s first funded non-US news programme.

It is to focus on a different issue each week and will be set in BBC News’ Washington bureau or elsewhere in the field. It is to use both vertical videos and the Facebook Live function.

Facebook Watch rolled out internationally in August, a year after it debuted in the US. The platform has reached 50 million viewers per month in the US, and the total time spent on the platform has increased by 14 times since the start of 2018, according to Fidji Simo, Facebook’s head of video.

Jim Egan, chief exec of BBC Global News, said: “Social media is an important source of news and information for many Americans, so we are always looking for new ways of bringing our audiences high-quality, nonpartisan news coverage they can trust from around the world.”

Campbell Brown, head of global news partnerships for Facebook, said: “Earlier this year we made a commitment to show news that is trustworthy, informative, and local on Facebook. As a part of that commitment, we are creating a dedicated section within Watch for news shows produced exclusively for Facebook by news publishers, and they will receive marketing support in News Feed.”

BBC News to launch weekly show on Facebook Watch added by Newsroom on September 13, 2018
View all posts by Newsroom →