By Newsroom on February 6, 2018Comments Off on Apple continues to dominate the tablet market as sales decline once again, according to IDC 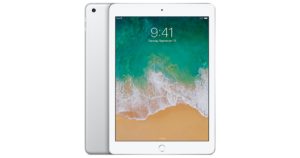 Sales of tablet devices once again dropped in 2017, according to new data. Figures from analyst firm IDC show that overall tablet shipments fell by 6.5 percent to 163.5 million units last year. That’s down from 174.9 million in 2016, when the annual decrease was in double digits.

Despite demand falling overall, Apple managed to grow its shipments from 42.6 million to 43.8 million, giving it a leading 27 percent market share, up from 24 percent a year previous. Samsung (second) and Lenovo (joint fourth) saw their sales drop, but Amazon (third) and Lenovo (also fourth) registered gains.

In a show of just how dominant Apple is, “others” accounted for 34 percent of the market with only Samsung and (just about) Amazon registering double-digit market share for 2017. 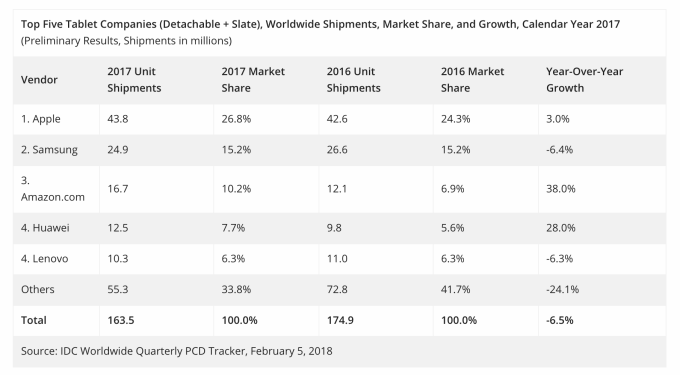 IDC found that while traditional ‘slate’ tablet shipments fell, ‘detachable’ tablet shipments were up 1.2 percent year-on-year. Indeed, in the final quarter of 2017 — the holiday period — detachables grew 10 percent to reach 6.5 million shipments. That’s dwarfed by 43.1 million for ‘slates’ in the quarter — with Apple picking up a dominant 27 percent of those numbers.

Apple continues to dominate the tablet market as sales decline once again, according to IDC added by Newsroom on February 6, 2018
View all posts by Newsroom →