By Newsroom on June 26, 2017Comments Off on Apollo Tyres AR app gives fans the chance to ‘Earn’ Manchester United Jersey 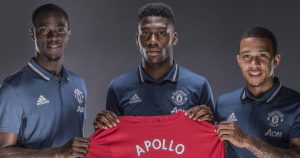 “The three-year association with Manchester United has supported our business expansion plans especially in India, Middle East, South East Asia and Africa,” said Marco Paracciani, CMO of Apollo Tyres, when the pair extended their partnership in September. “Our various campaigns have helped us connect with young people, increasing awareness of brand Apollo and customer acquisitions in these regions.”

This latest campaign by WATConsult, reflects Paracciani’s statement about connecting with young people and increasing brand awareness. The game may be about Manchester United but it centres solely on the scanning of the Apollo logo.