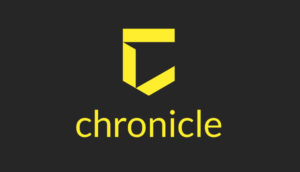 parent company Alphabet has a new business and it’s all about cybersecurity. Chronicle is an independent business under the Alphabet umbrella and it’s aimed at helping companies find, track and stop cyber attacks. With two branches — a cybersecurity and analytics platform, as well as a malware intelligence service called VirusTotal — Chronicle will use its massive processing power and data storage capabilities to assist businesses in retrieving information more quickly than they can on their own, as well as spot patterns based on years of data.

“Add in some machine learning and better search capabilities, and we think we’ll be able to help organizations see their full security picture in much higher fidelity than they currently can,” said Chronicle CEO Stephen Gillett in a blog post.

Gillett says that because companies are often hit with thousands of security alerts per day, it’s almost impossible to assess all of them thoroughly. “As a result, it’s pretty common for hackers to go undetected for months, or for it to take a team months to fully understand what’s going on once they’ve detected an issue,” he writes. “All this adds up to more data breaches, more damage, and higher security costs.”

Inadequate cybersecurity has never been a more apparent problem than it is today. Last year we saw reports of data breaches affecting government agencies like the US Army and the NSA, companies like Equifax, Forever 21 and Accenture as well as data exposures impacting voting machines, political strategists and Verizon customers. There were also multiple widespread ransomware attacks.

Chronicle says a few Fortune 500 companies are already testing a preview of its cybersecurity intelligence platform. “None of us have to settle for cyber crime being a fact of life, or for a reactive, expensive existence of cleanup and damage control,” it says. “We’re looking forward to working with many organizations in the coming years to give good the advantage again.”

Alphabet enters the cybersecurity business with Chronicle added by Newsroom on January 26, 2018
View all posts by Newsroom →