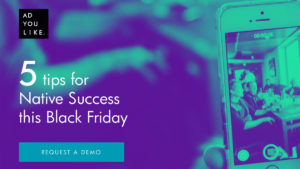 ADYOULIKE, a global leader in native advertising, has launched a Black Friday campaign targeting digital advertisers. The message behind the campaign is simple: Native Advertising works. And it will work for you this Black Friday.

Mobile made up 64% of all shopping visits in the US in 2017 and mobile saw a 41% increase in generated revenue. The small screen has traditionally struggled to find ad units that fit (small banners, interruptive interstitials etc) but Native Advertising is the only ad format that truly works on mobile, with infeed native advertising particularly effective. 2018 is set to be yet another big year of growth for mobile shopping.

Native advertising over-performs across all standard measurement metrics. Plus, due to the bespoke nature of the format – where most providers have direct publisher integrations, there are far fewer brand safety concerns around native advertising. Savvy advertisers are increasingly aware of native advertising’s effectiveness. 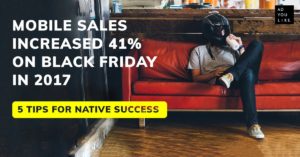 While the majority of the spike was recorded in the US – where Black Friday is big news – ad calls increased in all markets, in particular the UK, France and Germany – signalling that Black Friday is increasingly becoming a global phenomenon thanks to digital.

Adyoulike launch Black Friday campaign to highlight the effectiveness of native advertising added by Newsroom on October 26, 2018
View all posts by Newsroom →