Adform claims to have discovered the largest bot network, generating over 1.5 billion requests a day

By Newsroom on November 22, 2017Comments Off on Adform claims to have discovered the largest bot network, generating over 1.5 billion requests a day 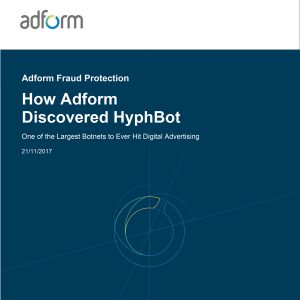 What is claimed to be the largest bot network ever has been discovered by Adform, which it has said was possibly four times the size of the Methbot network unearthed less than a year ago and accessing over half a million IP addresses, mainly located in the US.

The fraud team at the adtech firm has released a report explaining how it discovered the network, which it named HyphBot, and added that it thought the impact on its platforms were limited to under $1,000 a month.

According to the report, the network was discovered using Adform’s algorithms and analytics and was generating up to 1.5 billion requests each day across 34,000 domains, which included premium publishers, and was targeting over 1 million URLs.

Adform explained that it had identified how the network was able to gain access to details of its operation and had accessed parts of its source code in order to understand how the premium sites were ‘faked’ and where ads were displayed.

The inventory targeted was predominantly video at 1,578,765,000 requests, with the primary activity having begun in August and may have amounted to almost $1.5m in header bidding spend.

“We have access to the IPs of data centers where those servers are hosted. We also have direct access to advertising tags that are placed directly in the source code. This means [that] we have information on where exactly the bid requests originate from,” the company also claimed.

Adform advised demand- and supply-side platforms (DSPs and SSPs) to check for patterns highlighted within the report within their data warehouses and investigate cookie requests from those who visited within those patents, and to shut down any non-transparent source.

“There needs to be a real cost of doing business with fraudulent players,” it added before advising to block any cookies found to be infected and to enforce ads.txt.

Adform claims to have discovered the largest bot network, generating over 1.5 billion requests a day added by Newsroom on November 22, 2017
View all posts by Newsroom →