By Newsroom on March 7, 2018Comments Off on Uber marks International Women’s Day with a film showcasing its women drivers

For International Women’s Day Uber has launched a campaign film to celebrate its female drivers, while at the same time battle unfair stereotypes of women behind the wheel.

The campaign is dedicated “To all the women who challenge the status quo and press for progress everyday.”

The film brings together women who shatter stereotypes, as it sees female drivers go beyond by bringing hundreds of thousands of riders to their destinations every day. In addition, the film explains the stories of women who have joined Uber as a way to earn an income while also balancing other responsibilities, such as family, work, and education.

“We are delighted to showcase this film, which features our female driver-partners who challenge the status quo by driving with Uber. It’s about starting a conversation around how women are empowering themselves,” said Eshan Ponnadurai, Uber’s APAC marketing director. 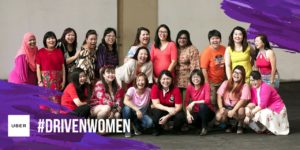 Uber marks International Women’s Day with a film showcasing its women drivers added by Newsroom on March 7, 2018
View all posts by Newsroom →