By Newsroom on October 31, 2018Comments Off on Twitter to ditch ‘likes’ to boost quality of online debate 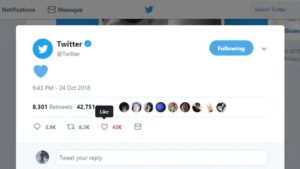 Twitter is planning to remove the ability to “like” tweets in an attempt to improve the quality of debate on the social network.

Founder Jack Dorsey last week admitted at a Twitter event that he was not a fan of the heart-shaped button and that it would be getting rid of it “soon”. The feature was introduced in 2015 to replace “favourites”.

Previously, favourites let users click a star-shaped button which would bookmark tweets to read later. However, psychologists have indicated this may be the cause of social media addiction among users who crave acceptance and interaction from their colleagues.

In March 2018 Twitter introduced “bookmarks” for saving tweets, signalling a pivot to a new system. But back in March, Twitter added ‘bookmarks’ as a way to save tweets, which hinted at a possible revamp of the site. Unsurprisingly people haven’t taken news about the change well, with many outraged by the idea.

Another commented: “I leave a like to let a person know that I saw/read their tweet and like what they said and it saves me a lot of time not having to respond with a ‘Yeah’ or ‘Like’ – Now I will just seem rude and look like I don’t respond or read their tweets!”

Dorsey also hinted that he will be bringing in an option to edit tweets, change the verification process so that a blue tick is no longer a preserve of celebrities and “influencers” and that it could change how users’ follower counts are displayed.

Twitter to ditch ‘likes’ to boost quality of online debate added by Newsroom on October 31, 2018
View all posts by Newsroom →