Spotify Teams up with Hulu for $5 Subscription Bundle for Students

By Newsroom on November 14, 2017Comments Off on Spotify Teams up with Hulu for $5 Subscription Bundle for Students 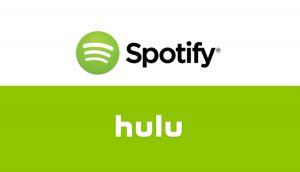 Spotify has teamed up with Hulu to make its subscription plan for students a lot more interesting: Students will now be able to get both a premium Spotify subscription and a subscription to Hulu for a combined price of just $4.99 a month.

Spotify Premium for Students, now with Hulu, as the plan is officially called, essentially combines Spotify’s paid on-demand music service with Hulu’s basic paid on-demand video tier, which the company calls its “limited commercials” plan. Bought individually without any discounts, both plans would cost $9.99 and $7.99 per month, respectively.

“We’re very excited to be partnering with Hulu – a like-minded company which is as focused as we are on delivering the very best in high quality streaming content,” said Spotify’s chief premium business officer Alex Norstrom in a statement.

“We are proud to announce Spotify as our newest strategic partner – they’re an iconic brand in music streaming and a proven leader in reaching and engaging young consumers,” said Hulu SVP and head of distribution and partnerships Tim Connolly.

The two companies apparently aren’t done with introducing subscription bundles, either, announcing Thursday that “offerings targeted at the broader market” were going to be revealed at a later date.

Spotify first launched its $4.99 student subscription plan in 2014. Apple Music, Tidal and others have since introduced similar plans, sans the paid Hulu subscription.

The announcement comes at an interesting time for Spotify. The music service launched its own video initiative with a dozen original shows last year, but apparently couldn’t find an audience for its original fare.

Recently, Spotify confirmed that former VH1 president Tom Calerdone, who had been in charge of Spotify’s video strategy, had left the company amid a refocus on video formats aligned with popular Spotify playlists like RapCaviar. On Wednesday, Variety broke the news that the company has hired media veteran Courtney Holt away from Disney to lead its video and podcasting efforts going forward.

Spotify Teams up with Hulu for $5 Subscription Bundle for Students added by Newsroom on November 14, 2017
View all posts by Newsroom →