By Newsroom on January 15, 2018Comments Off on Skype introduces Private Conversations with end-to-end encryption 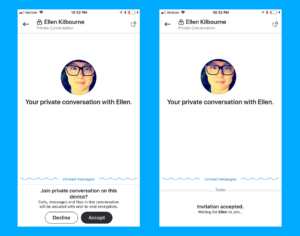 Skype, Microsoft’s popular VoIP platform, is introducing end-to-end encryption to text messages, audio calls and file transfers made using the service, with the latest ‘Insider’ version of the platform adding support for the Signal protocol.

Signal is already used by WhatsApp, Google Allo and Facebook Messenger to encrypt in-app discussions, as well as being available as a standalone messaging service. The technology ensures that conversations cannot be intercepted by third parties, including law enforcement agencies, which has drawn criticism from some governments.

Skype has used encryption in the past, but the exact details of what method was used, how it was implemented and which privacy and security features were offered have all been unclear, covered by the company’s proprietary algorithm. This new announcement provides users with a clearer idea of how protected their data and messages are.

The Private Conversations feature is currently only available in ‘Insider’ builds of Skype, the platform’s beta-testing scheme for a limited number of users. If it proves successful, the feature could well be rolled out soon.

Insider builds are currently available for the desktop version of the app, as well as iOS, Android, Linux and macOS. The Universal Windows Platform version, the preferred version on Windows 10 devices, isn’t yet supported. Currently, Private Conversations have to be activated, rather than appearing as the default option, and don’t support video calling, but once the updates prove stable and the option is more widely deployed, this is likely to change.

“We know extra protection is important as you share sensitive information over Skype, so we’re excited to announce the preview of end-to-end encrypted Private Conversations, available now for Skype Insiders,” said Ellen Kilbourne, support engineer at Skype in a blog post announcing the update. “During the preview, you will only be able to start private conversations with other Skype Insiders also running the latest version, and these interactions are limited to one-to-one conversations. Up next, we’d like to improve the UX around the invite to join a private conversation, and bring the experience to the UWP client.”