By Newsroom on March 8, 2018Comments Off on Ripple Develops Blockchain Payments App With 61 Japanese Banks 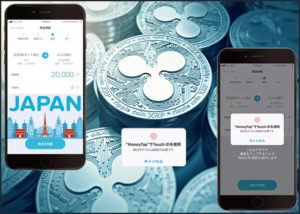 Japan Consortium is set to launch a revolutionary smartphone app called ‘MoneyTap’, which will allow customers to settle transactions instantaneously, 24/7. The app is powered by Ripple’s blockchain technology.

According to an announcement on Ripple’s official website, this is the first time in Japan a mobile transaction settlement app has been developed which will be utilized by multiple banks throughout the country. SBI Net Sumishin Bank, Suruga Bank, and Resona Bank start using the app in Fall 2018, after which various other banks will see a staggered release.

The Japan Consortium itself is comprised of 61 banks, which accounts for more than 80% of all banking assets in the country. It is also led by SBI Ripple Asia. Thus, MoneyTap effectively puts instantaneous banking in the hands of the vast majority of Japan’s population — who are primarily limited to business day transactions between the working hours of 8:30 am and 3:30 pm.

To use MoneyTap for instant domestic payments, customers need only a bank account, phone number, or QR code. Additionally, fees will be significantly reduced from the traditional banking and ATM fees, since the blockchain-powered transactions will be both faster and cheaper.

SBI Ripple Asia’s CEO, Takashi Okita said: “We are proud to leverage Ripple’s blockchain technology through our new mobile app, MoneyTap, to improve the payments infrastructure in Japan. Together with the trust, reliability and reach of the bank consortium, we can remove friction from payments and create a faster, safer, and more efficient domestic payments experience for our customers.”

Ripple has continued to make friends in high places over the past few months, as the company looks to provide solutions for cross-border payments with its in-house xCurrent and xRapid technologies. However, this news out of Japan is truly revolutionary in the sphere of day-to-day domestic banking.

Emi Yoshikawa, director of joint venture partnerships at Ripple explains: “The release of the MoneyTap mobile app shows Ripple’s continued commitment to provide its partners across Asia and the world with blockchain-powered solutions that dramatically improve the customer payments journey. We’re proud to provide this production-ready technology that not only improves the international payments experience, but also have applications for domestic payments infrastructure.”

Ripple’s core mission of helping money move as instantaneously as information is clearly coming to fruition, and it’s difficult to overstate just how revolutionary this app may be.