By Newsroom on March 27, 2017Comments Off on New e-ink calendar syncs to Google account

The traditional wall calendar has been given a high-tech upgrade, thanks to a clever use of electronic ink from a Japanese inventor.

Created by Japanese designer Kosho Tsuboi, the Magic Calendar looks like it’s made of paper, but is actually a subtle smart screen. 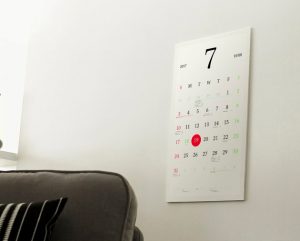 The calendar, currently only in prototype stage, works as an e-paper screen that syncs with Google Calendar, effectively giving an internet-connected twist to the standard wall-hanging day planner.

Part of Google’s Android Experiments program, it uses an ‘e-ink’ display (similar to that in Amazon’s Kindle) to update automatically with entries in Google calendar apps.

Android Experiments Objects showcase is a case for how the IoT can take a ubiquitous household item and make it fantastically more useful.

The video also shows some other uses for the device – there’s a point where the Magic Calendar appears to display a world time zones map, and another where it displays a full-screen cooking recipe.