By Newsroom on January 8, 2018Comments Off on More than 10 Million people rang in the New Year with Facebook Live

The social network introduced its Live With feature for Facebook Live in May, enabling users to invite guests to join their livestreams, and Connolly and Modi said the number of people using the feature on New Year’s Eve was three times the average for a December day. 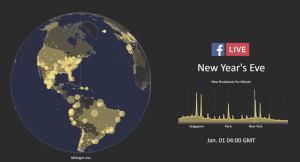 The most-used Reaction during New Year’s Eve Facebook Live videos was Wow, Connolly and Modi wrote, and the top 10 US cities for live-streams Sunday were:

More than 10 Million people rang in the New Year with Facebook Live added by Newsroom on January 8, 2018
View all posts by Newsroom →