By Newsroom on August 13, 2018Comments Off on Jaguar Land Rover Comes Up Trumps with New Card Game App 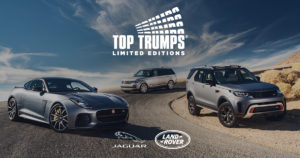 Created by Spark44, the digital version of the game featured vehicles displayed on the Jaguar Land Rover stand, including the all-new electric Jaguar I-PACE and Range Rover PHEV. 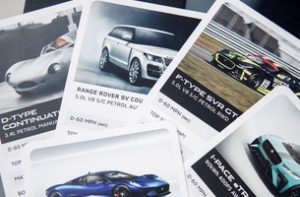 Using the App players were able to play against each other and also compete with other Goodwood FoS visitors via a live leader board to win daily Jaguar Land Rover prizes, such as Jaguar Land Rover Ice Driving in Sweden, a 12 month family membership for David Lloyd Leisure Clubs and a £200 branded goods gift voucher. 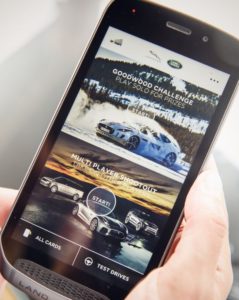 Visitors to Goodwood FoS were also able to collect 5 limited edition Super Top Trumps playable with the full physical pack at the event.

A household name in Britain for 40 years, Top Trumps will be familiar to and much-loved by the Goodwood visitors. Top Trumps is the UK’s most well-known, most played, and owned card game (iGen, 2017). Top Trumps is a fast, fun game that contains statistics, biographies and the coolest facts about your favourite subjects.

The gameplay mechanics have been proven to assist in the development of maths, literacy and decision-making skills (NCB, 2011) whether playing with the educational classics such as Dinosaurs, Volcanoes & Wonders of the World or your favourite football team, brand, TV show and of course the latest Jaguar Land Rover vehicles.