By Newsroom on July 21, 2016Comments Off on Interactive chatbot lets you talk with a World War I soldier on Facebook Messenger 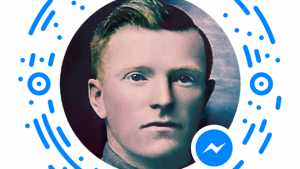 The rise of the bot has been one of the dominant tech trends of 2016, but apart from ordering you flowers or an Uber, the automated systems could also deliver a history lesson.

News Corp Australia has launched a chatbot on Facebook Messenger that allows users to interact with Tasmanian soldier Archie Barwick, who fought in World War I. The chatbot was created by AnzacLive, an interactive project that helps users learn more about the personal experiences of Australians on the frontline.

While the project has so far allowed people to interact with veterans, including nurses and soldiers, via Facebook posts, the chatbot will allow for a more private conversation with Barwick as he battles on the Western Front.

“We did it to mark the July 1916 battles of Pozieres and Fromelles, the Australians’ first major clashes on the Western Front,” Justin Lees, editor of AnzacLive, told Mumbrella. “We wanted to do something a little special, beyond the usual AnzacLive activity on regular Facebook.”

In addition to supporting a one-on-one conversation, the bot is also programmed to send periodic updates of the soldier’s experience on the frontline. According to News Corp, the bot’s answers should improve the more people ask him questions and will follow Barwick’s actual movements and locations throughout the battle.

All Barwick’s answers are taken from his journal entries, however, so he’s not currently equipped to take on contemporary conundrums, unfortunately.

Interactive chatbot lets you talk with a World War I soldier on Facebook Messenger added by Newsroom on July 21, 2016
View all posts by Newsroom →