By Newsroom on July 25, 2016Comments Off on Hillary Clinton app motivates volunteers with signed souvenirs 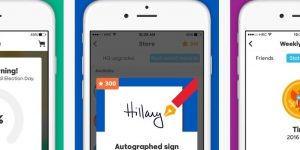 Hillary Clinton supporters are being urged to download an official smartphone app designed to help organise and motivate volunteers in support of her presidential bid by relaying the latest campaign news and events and encouraging competition by awarding points to the most ardent backers.

Hillary 2016 is available now on Apple’s app store from which in-app and real life rewards can be accessed such as a souvenir signed by the candidate herself, daily challenges to help Clinton on her way to the White House as well as quizzes on policy.

Upon downloading the app supporters of the Democratic candidate can build their own digital headquarters, with the option of remodelling the interior to stamp their mark on the app hub.

The app also takes a swipe at her Republican challenger, Donald Trump, presenting Clinton as the ‘only thing’ standing between the controversial billionaire and the presidency. In some of her recent ads, Clinton has claimed Trump is an unsafe candidate.

An Android version is still in development but is expected to launch soon.