By Newsroom on October 31, 2018Comments Off on Google’s 2018 Halloween Doodle is also its first multiplayer game 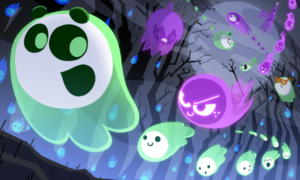 The world’s biggest search engine is getting into the Halloween spirit with a special playable Google Doodle. While Google has busted out game Doodles in the past (including for Halloween 2016), this is the first time the information giant has made a multiplayer game that players can jump into with other people online. Think of it as the opposite of Slither.io.

The rules of Trick-or-Treat: The Great Ghoul Duel are simple. You play a cute apparition picking up “spirits” and bringing them back to your base for points. All non-deposited spirits will trail behind you, like a tail. The trick is that anybody who touches your tail can steal your unbanked spirits — but you can steal other people’s spirits, too. As you score points, spirits may give you powers like speed boosts, or the ability to walk through walls. Games only last two minutes, but that’s enough time for all sorts of shenanigans. Like Overwatch, the Doodle gives out commendations and titles at the end, depending on your performance. 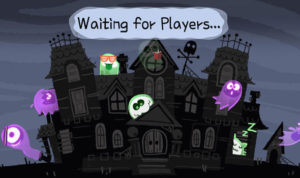 “In a Doodle first, players can choose to host a game with up to seven friends and family via a custom invitation link OR just play with randomized players around the globe,” reads the blog post announcing the game. “The team built several systems to enable this multiplayer gaming, all running on the Google Cloud Platform, including integrating Open Match, a highly-scalable, open source matchmaking framework cofounded by Google Cloud and Unity.”

You can play it here; just click on the picture. Pro-tip: you can rack up a quick high score by waiting in the middle area and sniping your rivals to score points… or when everyone else is doing that, find the side of your base that no one’s using, and gather spirits at your leisure while everyone else is sniping each other.

Google’s 2018 Halloween Doodle is also its first multiplayer game added by Newsroom on October 31, 2018
View all posts by Newsroom →