By Newsroom on March 1, 2018Comments Off on Google takes aim at Slack with new Hangouts update 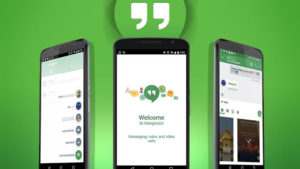 Hangouts Chat functions in similar fashion to Slack and other workplace messaging platforms, but also provides a slew of other Google products such as Docs, Sheets, Slides, Calendar and Cloud Search. Google also says it will use AI to speed up workflow when teams are booking hotel rooms or searching for a file.

Companies including Salesforce, Zenefits, Xero and Trello have developed programs for the new offering, Google says.

Still, despite its size and offerings, Google itself has had little success with messaging apps; to date, the company has rolled out more than a dozen, many of which have since been shut down. Slack also has the upper advantage in being first to market, though that doesn’t necessarily translate to lasting success.

“The research on this is pretty clear: first mover advantage is largely overrated,” says Ben Clarke, president at The Shipyard. “There are many examples of later movers ending up with greater market share. The reason this isn’t a threat to Slack has less to do with their first mover advantage and more to do with the fact that Slack is a wonderful service that solves a difficult problem—multithreaded communication with a balance of real time and archival or retrieval capabilities.”

As Clarke puts it, Slack has mastered the user experience. “It provides benefits of chat that are real time, fluid with benefits of email like storage, search and structure,” Clarke says. “I don’t see anything in Google’s announcement that indicates Google’s new service is going to do the job better.”

Hangouts Chat differs from the Hangouts most people know from chatting with friends through Gmail. The product is part of Google’s G Suite, an enterprise offering that is used by more than 4 million businesses, Google says.

Since Slack’s debut, workplace messaging has since become a crowded place. Companies like Microsoft, Cisco and Facebook have also jumped into the fray. With so many tech giants, Google’s official move into the space may spell trouble for consumers.

Much as YouTube isn’t available on Amazon’s Echo Show, Google might decide to withdraw features that are currently integrated with Slack. Microsoft can also play rough with its massive ecosystem of products, too.

“I think this could potentially get ugly with service integrations for companies like Slack,” Clarke says. “Today, you can get a Slack notification when a new Google Doc is created. If Google decides to shut off such integrations, then people may have to decide if they want a cohesive ecosystem where everything plays nice, or a superior chat platform.”

Google takes aim at Slack with new Hangouts update added by Newsroom on March 1, 2018
View all posts by Newsroom →