By Newsroom on December 7, 2016Comments Off on Facebook Workplace launches a new platform to compete in the work-app wars 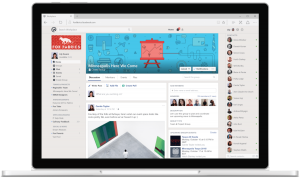 The chat war for business customers just got hotter as Facebook announced that it has launched a platform for Facebook Workplace, a product with many of the same features as Facebook but for internal company communication.

Businesses will now be able to pull into Facebook Workplace software-as-a-service (SaaS) solutions, customer relationship management (CRM) software, and other products and software used for work. These can include Salesforce, Google, or calendar and productivity apps.

Formerly Facebook at Work, Facebook Workplace launched in October after almost two years of beta testing with tens of thousands of users at companies like Club Med, Hootsuite, and the Royal Bank of Scotland.

Since launch, Workplace has added more than 100,000 new users from companies like AirAsia and government agencies in Singapore. With the platform called Custom Integrations, IT teams within companies will be able to make their own apps, and integrations with CRM software like Salesforce, Zendesk, and other apps organizations use.

This version of the platform will not have an enterprise app store like the Slack App Directory; it is only for IT teams to make custom apps and integrations. Apps will be able to do things like post content to groups and create alerts or control notifications that employees see on Workplace.

The plan to allow companies to customize their Facebook Workplace was announced on stage at TechCrunch: Disrupt in London.

Workplace is designed, said Facebook Workplace director Julien Codorniou, to be a home page and place to gather ideas for an entire company, not just the engineering team or executives. It’s a unique platform, Codorniou told VentureBeat this time a year ago, because it requires no training. 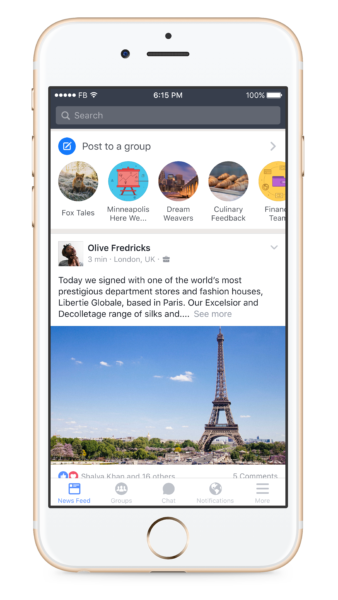 That distinction, he said, will be the difference between Workplace and competitors like Slack, HipChat, and others who want teams to use their chat and collaboration clients.

“The big surprise for us is to see that the more connected an organization becomes, the more productive it becomes, and I think there was a gap in the market,” Codorniou said. “No one was really addressing that market, people who have never been connected before in the workplace, and that’s what we want to do with Workplace, and I think you can only do that when you have something with the familiarity of Facebook, an application that 1.8 billion people use every month.”

Competitors in the team collaboration and group enterprise chat space have made a lot of changes lately.

Microsoft announced plans this fall to make its own enterprise bots, brought Yammer and Office closer together, and launched new collaboration app Microsoft Teams. Slack passed one million paid users and made integrations with IBM Watson and the Microsoft Bot Framework, while Atlassian’s HipChat now works with Alexa.

Facebook Workplace launches a new platform to compete in the work-app wars added by Newsroom on December 7, 2016
View all posts by Newsroom →