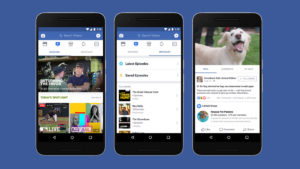 Facebook has announced plans to promote videos more prominently inside its News Feed, using the central feature of its main app to build more interest in the original video content it has created and compete more directly with YouTube. As part of the plans, it will also change the kind of advertisements that run in videos on its network.

Among the ad changes that the social network has announced is the introduction of pre-roll advertising, which is being tested in environments where users “intentionally go to watch videos”, such as its recently-added Watch tab. The introduction of pre-roll is part of the company’s plans to make its platforms more appealing to video creators, who have so far overwhelmingly used channels like Google’s YouTube and Twitter’s now-defunct Vine.

The changes to the News Feed will mean that users are more likely to see videos that Facebook thinks they want to watch, based on pages they have liked and behavioural data from the site, for example presenting new episodes of shows if users have watched earlier episodes.

“Today, the majority of video discovery and watch time happens in News Feed,” said Maria Angelidou-Smith, product management director at Facebook in a blog post announcing the changes. “News Feed provides a great opportunity for publishers and creators to reach their audience, drive discovery, and start to build deeper connections for their content.

“While News Feed will remain a powerful place for publishers and creators to grow and connect with their audience, over time we expect more repeat viewing and engagement to happen in places like Watch. The Discover tab in Watch will also prioritise shows that people come back to. As new shows build audiences, places like Watch are well suited for people to predictably catch up on the latest episodes and content from their favourite publishers and creators, and engage in a richer social viewing experience.”

Among the other changes announced in the post were that Facebook will no longer allow ads in the middle of videos unless they are at least three minutes long, which the company hopes will encourage companies and creators to produce longer content, and that only pages with more than 50,000 followers will be able to insert ads into Live Videos, to ensure that advertisers can be guaranteed a substantial audience and the videos meet Facebook’s Content Guidelines for Monetisation.