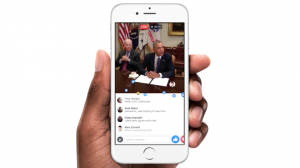 Facebook has confirmed that it is seeking to monetise live-streams with the addition of mid-roll ads to its growing Facebook Live service.

The world’s largest social network confirmed the move in 2016, saying in an email: “We’re running a small test where a group of publishers have the option to insert a short ad break in their Facebook Live videos.”

A source familiar with the matter, who has discussed the ads with Facebook, said the new format will appear five minutes into real-time broadcasts on the platform, and will last up to 15-seconds or less.

The social network reportedly told advertisers that the video ads would be selected from campaigns already running on the platform, and said that publishers will be able to control what type of brands they can run in their channels.

Media owners will also be able to turn off ads if there are any sensitive subjects being covered; something that will come as welcome news to Facebook Live’s slew of publishing partners given that the channel has previously been used to cover sensitive news stories like the Turkish Coup and the EU referendum.

Facebook has been investing heavily in Live over the past few months in a bid to outpace Twitter-owned competitor Periscope. In June it signed deals with over 140 publishers and creators, stumping up more than $50m to get them to produce content on the real-time platform for its 1.7 billion users.

Facebook confirms trials of mid-roll ads on Facebook Live added by Newsroom on January 10, 2017
View all posts by Newsroom →